Urban Legends about the Bible: Seven Myths to Avoid When Preaching 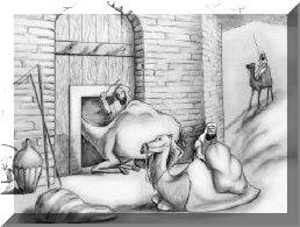 There are interpretations of the Bible that have surfaced in pulpits across North America for generations. These are often presented as “facts” that provide important background information for understanding the Bible. The problem, however, is that these are myths, fanciful interpretations that have been attached to particular passages, but have no basis in history.

Trevin Wax has listed seven of these myths. I must admit that some are new to me, but others are not. Here is Trevin’s entire post. Please be sure to stop by his blog and see some of the other urban legends that preachers should avoid. I do have a suggestion for how the first myth arose, perhaps I will post on that one soon.

The “eye of the needle” refers to a gate outside Jerusalem.

“It is easier for a camel to go through the eye of a needle than for a rich person to enter the kingdom of God,” says Jesus in Mark 10:25. Maybe you’ve heard of the gate in Jerusalem called the “eye of the needle.” The camel could pass through it only after stooping down and having all its baggage taken off.

The illustration is used in many sermons as an example of coming to God on our knees and without our baggage. The only problem is… there is no evidence for such a gate. The story has been around since the 15th century, but there isn’t a shred of evidence to support it.

2. The high priest tied a rope around his ankle so that others could drag him out of the Holy of Holies in case God struck him dead.

Various versions of this claim have been repeated by pastors, but it is a legend. It started in the Middle Ages and keeps getting repeated. There is no evidence for the claim in the Bible, the Apocrypha, the Dead Sea Scrolls, Josephus, the Pseudepigrapha, the Talmud, Mishna or any other source. Furthermore, the thickness of the veil (three feet) would have precluded the possibility of a priest being dragged out anyway.

3. Scribes took baths, discarded their pens, washed their hands, etc. every time they wrote the name of God.

As a way of getting across the reverence of the Jewish and Christian scribes toward God, preachers like to describe the honor given to God’s name. Unfortunately, there’s no evidence that scribes did these sorts of rituals every time they came across the name of God.

4. There was this saying among the sages: “May you be covered in your rabbi’s dust.”

This is one of the most pervasive and fast-spreading stories to flood the church in recent years. The idea is that as you walked behind your rabbi, he would kick up dust and you would become caked in it and so following your rabbi closely came to symbolize your commitment and zeal. Joel Willitts explains:

This is powerful stuff isn’t it? Well the only problem is that it just isn’t true… The context in which it is given in Mishnah Aboth 1:4 is expressly not what is assumed by those who promulgate this idea.

5. Voltaire’s house is now owned by a Bible-printing publisher.

Voltaire was famous for saying, “One hundred years from my day there will not be a Bible in the earth except one that is looked upon by an antiquarian curiosity seeker.” There is a myth out there that within 50 years of Voltaire’s death, his house was owned by a Bible society that used his own printing press to make Bibles. Sounds like a great story, but it’s not true. Regardless, Voltaire’s prediction of the demise of the Bible was vastly overstated.

6. Gehenna was a burning trash dump outside Jerusalem.

I’ve used this illustration many times. But there isn’tevidence to support this idea. Still, because it seems like a reasonable explanation for the origin of the Hinnom Valley as “hell,” commentators and preachers have accepted it. It’s possible that the verdict may still be out on this one, but not if Todd Bolen is right:

“The explanation for the ‘fire of Gehenna’ lies not in a burning trash dump, but in the burning of sacrificed children. Already in Old Testament times, the Valley of Hinnom was associated with the destiny of the wicked. That the valley was just outside the city of Jerusalem made it an appropriate symbol for those excluded from divine blessing.”

7. NASA scientists have discovered a “missing day” which corresponds to the Joshua account of the sun standing still.

Please don’t repeat this myth. There has been no “missing day” discovered, and the legend has been circulating longer than NASA has been in existence, with different scientists playing the part.

Please take some time and look at Trevin's blog.