Slavery Language in the Bible: How should it be translated? 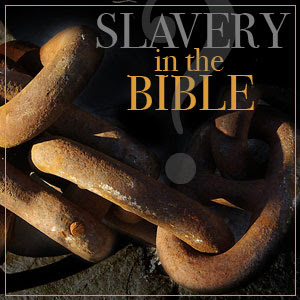 *This is a longish post for me, so I apologize in advance. Hopefully it will be of interest to some.

I discovered through facebook that the BBC recently aired a program titled: When God spoke English: The making of the King James Bible. The program is part of the international celebration of the KJV’s 400th anniversary. Unfortunately, the program is not yet available in North America.

Part of the program features a 5 minute clip of the ESV committee working at Tyndale House. The topic of the committee’s discussion is how to translate the word slave in the Bible. Pete Williams, warden of Tyndale House, was kind enough to direct me to a youtube clip of the committee’s discussion. It provides a brief look at how translation committees work on difficult issues. I have placed the clip below and then would like to make a few remarks in response to some of the comments made.

There are few things that I would like to say in response to the way slavery language appears and is translated in the Bible.

First I want to acknowledge that this is a difficult if not near impossible task for any translator/interpreter. Not only do we have to contend with the understanding and practice of slavery in antiquity, we also must grapple with the world’s most recent experience of institutional slavery in America and the way that the Bible was used by some to support the enslaving of human beings. It is near impossible for the one not to influence the other as was noted in the clip.

Second, it is clear that the youtube clip is an edited compilation of what was clearly a longer meeting and certainly involved much more conversation than is being presented. The way the discussion moves between Hebrew Bible and New Testament makes this clear. I have every confidence that the scholars in this clip took longer than five minutes to debate how they would translate “slave” in the Bible.

With the above two caveats in mind, here are some of my thoughts on what is being said here.

Again, I want to emphasize that I know that the clip has been edited, and Pete Williams informs me that some of the material is out of order. I am not surprised. However, anyone watching this clip might get the wrong impression about slavery and the Bible. I think it is important to note that the topic and the challenge of translating the terminology are more complicated than is sometimes appreciated. Our experiences with slavery, particularly in America, may tempt us to sanitize the Bible of an institution that makes us uncomfortable. But if we understand the Bible in its historical setting, we see that slavery was a very real part of the world. The challenge for translators and interpreters is not to mitigate that reality while at the same time learning from it. It is ok to be uncomfortable with the Bible. It is what we do with it that is important.