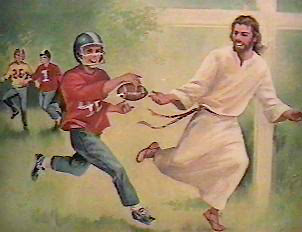 I am not a football fan. In fact, I am not a fan of any sports. I am not against sports, I am just not interested. I do attend a Superbowl party now and then. However, I don't really watch the game. I eat the snacks and watch the commercials. At one time I was interested in the halftime shows, but  the performances by the Who and the Black eyed Peas put me off that habit for a while.

But inspite of my lack of interest in football it has been almost impossible to miss the Tim Tebow phenomenon. I became aware of him and his prowess as a comeback quarterback in December. In response I posted on Facebook "What is a Tebow?" It was funny how many people were almost insulted that I did not know about him.

As I have since come to learn, besides being a fairly decent quarterback he is also a very public Christian. His habit of one knee prayers (now known worldwide as "Tebowing") and painting John 3:16 on his eye black has left little doubt where he stands. He is a very public Christian. And I don't condemn him for that. I have not heard of him saying or doing anything stupid thus far that would detract from the witness for Christ that he seeks to represent.

No, my problem is not with Tebow but some of his Christian fans. There have been numerous things that have been said including that Jesus is somehow helping Tebow to win football games. I am not sure if Jesus is a football fan or not, but I am pretty sure he is not playing the game.

Until today I found no reason to blog on Tebow. This blog tries to avoid politics, sports and other mindless distractions. But the news about yesterday's game finally pushed my hand. Apparently, Tebow threw 316 yards in yesterday's game. Unfortunately, his fans are now seeing some type of sign from God. Here is a piece from the Washington Post.


The Denver Broncos’ playoff win over the Pittsburgh Steelers on Sunday night was unlikely enough, but Tim Tebow’s passing yardage — the Christian quarterback threw 316 yards — sent commentators over the edge. The Associated Press reported that he also averaged 31.6 yards per completion. The religious connotations to John 3:16, a famous Bible verse, were too much for many to chalk up to chance.

Wow, that surely is an amazing coincidence! But I am pretty sure it has nothing to do with God. You see, God has nothing to do with John 3:16 being John 3:16. When the author of the gospel wrote those famous words he did not include the reference 3:16 since there were no chapter and verse numbers. In fact, Bibles have existed longer without chapter and verse numbers than with them. The first English Bible to include chapters and verses was the Geneva Bible which wasn't published until 1560. Prior to that time no one had a clue what 3:16 meant and if you had asked people in church to open their Bibles to that page they would have looked at you blankly. Imagine the looks people would have received if they painted 3:16 on their face or held up signs with it at sporting events.

The fact is the verses of the Bible are not inspired. And while I do suppose it is a cool coincidence that Tebow threw 316 yards, I am pretty sure it has nothing to do with Jesus. It has more to do with his discipline and skill as a player and the other players that are catching his passes. So I wish Mr. Tebow the best and hope that he can live up to his very public witness. But I also wish that his fans would think a bit more. I am not really sure God is pleased with the level of interest and energy that is put into suggesting that Jesus plays or is interested in football. I suspect that he is busy with vastly more important stuff like starving children and other disasters in the world. I also suspect that he wishes his followers were more interested in them as well.

Here is an update to my thoughts on the topic.