Is Jesus in Roswell? 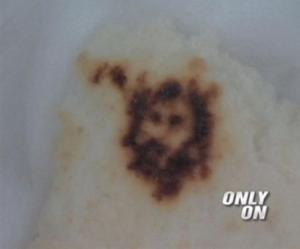 Do you believe in coincidences? Aliens? Conspiracy theories? You might after you read this.

On Ash Wednesday a man in New Mexico discovered the face of Jesus staring back at him on a tortilla that he was about to bite into. Here is the report from UPI.


A New Mexico man said he discovered the image of Jesus Christ on a tortilla he was preparing on Ash Wednesday.

David Sandoval of Espanola said he was shocked to discover the face of Jesus on his food, but he has always been a believer in Christianity, KOAT-TV, Albuquerque, reported Thursday.
"It became even more astonishing, with it being the first day of Lent," Sandoval said. "I passed it to my mom and the same response came from her, 'Oh my God.'"

Sandoval said he posted a picture of the image on Facebook and the response has largely echoed his own.

"Everybody has been able to see it. They're calling it a miracle," Sandoval said. "New Mexico has always been known to have interesting things happen during Lent time."


Its not clear if the man had given up tortillas for Lent and perhaps this is a case of divine intervention. It's bad enough eating fish and other food that stares back at you. But when the Son of God shows up on your sandwich it may be time to call it a wrap.
Posted by John Byron at 10:59 AM