The Bible - A Video Game? 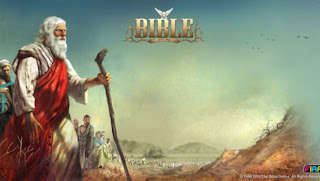 This came across the news the other day. Apparently there is a company about to release a multi-player video game that allows players to witness and reenact the stories of the Bible. Sound like something that you want to buy for little Johnny or Mary so they can really experience the world of the Bible? Think again. This is how it was described on one gaming site.

If you've ever read all the rape, genocide and deep-seated racism in The Bible and thought to yourself, "Man, that sounds like my kind of world," then this is the game for you! The Bible Online allows players to "slip into the role of Abraham and his descendants and have the opportunity to reenact and witness the incidents of their times."

The game is going to be split into chapters with The Heroes being the first released. The basic setup is that of an MMO strategy game, where players control their own tribe, build a city, and naturally wage war in the name of God. It won't be a case of holding onto territory, however, as the ultimate goal is leading one's band of merry savages into the promised land.

I find this disturbing. When I first saw the news about the game I had not read the above. I was already wondering what this kind of game would teach people, especially children. Will they reenact the slaughter of the people of Canaan at the hands of Joshua and the Israelites? What about the story of the Levite and his concubine from the book of Judges?
It is hard enough to make sense of much of the violence in the Bible without having a game that encourages kids (and adults) to reenact it. We live in a Post-Holocaust world and there has been a lot of work by Old Testament scholars to try and figure out how we make sense of the genocide that takes place in the Bible. My colleague, Dan Hawk, is one who wrestles with this question. I am not sure games like this will help us.
What do you think? I am wrong here? Should this kind of approach to the Bible be encouraged?
Posted by John Byron at 9:15 PM