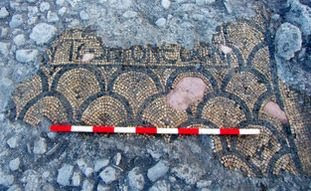 The Jerusalem Post reports that a Samaritan synagogue has recently been uncovered.

Directors of the Israel Antiquities Authority excavation, Dr. Walid Atrash and Ya’aqov Harel issued a statement Monday saying “the synagogue that is currently being revealed played an important part in the lives of the farmers who inhabited the surrounding region, and it served as a center of the spiritual, religious and social life there.”

The statement added that the synagogue, which is believed to have stood from the fifth century CE until the eve of the Muslim conquest in 634 CE is indicative of how in the Byzantine period (fourth century CE), "Beit Shean became an important Samaritan center under the leadership of Baba Rabbah, (an ancient Samaritan leader and reformer) at which time the Samaritans were granted national sovereignty and were free to decide their own destiny. This was the case until the end of the reign of Emperor Justinian, when the Samaritans revolted against the government. The rebellion was put down and the Samaritans ceased to exist as a nation."

The Samaritans are Israel’s smallest minority and one of the world’s oldest and smallest religious sects, numbering barely over 700 with a history that dates to before the Babylonian exile. Around half of the community lives in the enclave of Neve Pinchas in Holon, while the rest live on Mount Gerizim, some 800 meters above the outskirts of Nablus.