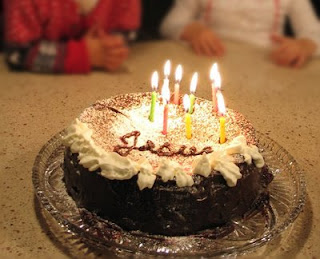 The following appeared this week in the Belfast Telegraph.

The advertisements for Christmas are already beginning to inundate us.

After all, 25 December is only three months away: that's just over a quarter of a year to spend all that money. Many theologians readily admit that 25 December is not the true birth date of Jesus Christ. When, then, is the true date?

Jesus, then, was born six months later, on Sukkot, or the Feast of Tabernacles, which falls on Tishrei 15.

This may not mean very much to us who use the Gregorian calendar, but Tishrei 15 falls this year on Thursday 23 September.

Biblical days begin at sunset, so the feast actually starts on the evening of 22 September, which would have been the "silent and holy night" we will all be singing about three months later.

So Jesus's real birthday will pass with hardly a soul knowing it.

The problem with this story is that no one really knows what time of the year Jesus was born. Some have argued that Luke's description of the shepherds having their sheep in the fields suggests a time between March and December. In his commentary on Daniel, Hippolytus (165-235) says that Jesus was born on December 25th. But many scholars have also concluded that this statement looks like a later addition. The December 25th date does have support among some church fathers like John Chrysostom (345-407), but we also know that since the church fathers often copied from one another they also perpetuated each others mistakes. Thus, a bunch of people all saying the same thing does not make it so.
The December 25th date seems to have been set by the Roman church around the early fourth century. The date corresponds with solar dates. Thus Christmas falls around the time of the winter Solstice. It may also have been an attempt to do away with the celebration of Pagan holidays, but that is not certain.
Of course there is also the issue that Eastern Orthodox Churches celebrate the birth of Jesus on January 6th or 7th, which corresponds with the Western December 25th. The problem, you see, is that they use a different calendar.
In the end I don't think the date of Jesus' birth is as important as the event. We can do pretty good determining the year (circa 4-6 BCE), but not the day and month.
All of this makes me wonder why people get all worked up about the date of Jesus' birth. I have yet to hear anyone argue for celebrating Easter on the same day every year. Of the two I would think the celebration of Jesus' resurrection would be more important to Christians than the exact date of his birth. But somehow that never seems to be an issue.
Posted by John Byron at 12:00 AM