Jesus Appears on a Telephone Pole 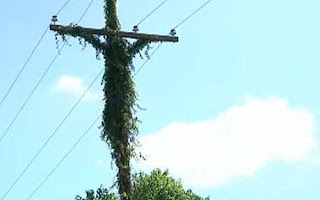 The following appears in today’s edition of the UK newspaper The Telegraph.

An image of Jesus Christ on the cross has been “seen” in a telephone pole covered in vines next to a motorway in Louisiana.

The resemblance was reported by drivers on Highway 26 in rural Jeff Davis parish. One of them, Rickey Navarre, told US television station KPLC: “It just caught my eye. I said to myself that sure looks like an image of Jesus hanging from the telephone pole. “He might just be telling us something, you know, 'I’m looking over you, I’m going to answer your prayers.’”

Local officials were less inspired by religious fervour when they saw the pole and decided it was a safety hazard.

They said the vines were close to high voltage wires and had already been earmarked for cutting before their potential religious significance emerged.

After news of the potential symbolism of the pole came to light the officials acted even more quickly, in case someone tried to climb it to be closer to Jesus. Mike Heinen, a local electrical manager, told KPLC: “We were getting to that one but since it had such notoriety we went and cleared it up today. “For public safety concerns we don’t want anybody trying to climb the pole or trying to touch the vines.” He said a church might be a better place to go looking for Jesus.

I am not going to touch this one with a ten foot pole. Perhaps you have a comment?