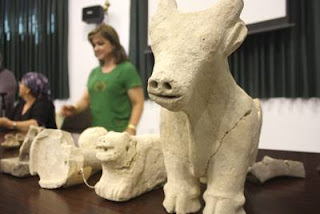 Last month Jordan's Department of Antiquities announced that archaeologist had uncovered a 3000-year old Moabite Temple. Today there is a nice piece on the discovery in the Jordan Times. Here are a few excerpts from the article.

AMMAN - Archaeologists on Wednesday unveiled what they described as one of the most important Iron Age discoveries in the region, including a 3,000-year-old Moabite temple.

At a press conference yesterday, Department of Antiquities (DoA) Director General Ziad Saad announced the recent discovery of the largest early Iron Age temple in the region, dating back to between 1200 and 600 BC.

The three-storey temple, which includes a 12-by-12-metre courtyard, yielded over 300 Moabite artifacts, leading experts to believe it was once a political and religious base for the Moabite kingdom.

The Moabites are believed to have been Canaanite tribes that settled in the land between the River Jordan and the Eastern Desert near what is now Dhiban in the 14th century BC. Their reign came to an end with the Persian invasion around the 7th century BC.

Much of what is known of the Moabite civilization has been learned from King Mesha, immortalized in a basalt tablet listing his victories and accomplishments. Known as the Mesha Stele, the tablet was discovered near Dhiban and is now on display in the Louvre in Paris.

This find is significant for a number of reasons.
First, it will help us to learn more about a people group from the ancient world. We have very little cultural artifacts from the Moabites.
Second, it may help us to understand the balance in regional powers 300 years ago. Historical documents, including the Bible, can only tell us so much.
Third, it helps to promote archaeology someplace other than the land of Israel. I am not against digging in Israel and Palestine. I will be working at Tel-Gezer again next summer. But a lot of money is sent to digs in Israel while there are numerous sites throughout other parts of the region that could be excavated and help us to learn more about the world of the time period.
I hope such finds like this temple will begin to get the attention of funding agencies and individuals who will in turn donate money to excavations in places like Jordan.
Posted by John Byron at 8:47 AM