Reading the Bible takes a bite out of crime 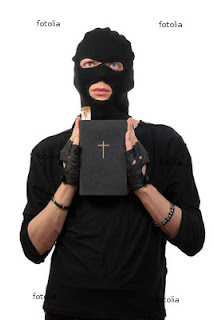 This story came across the wires today.

A thief in South Korea turned himself in after his victim convinced him of the error of his ways by reading to him from the Bible.

Ling Cho walked into an English language institute in Ulsan Jungbu and demanded money at knifepoint from the lone teacher, reports Metro.

The teacher asked him why he was robbing her - and listened as he explained how he fell into a life of crime after divorce left him poverty stricken.

The teacher read to him from the Bible, and Cho apologised for trying to rob her. The teacher then gave him an MP3 player filled with gospel tunes, and he left.

But he returned 20 minutes later, in tears, and asked the teacher to report him to the police. After she refused to turn him in, the thief called the authorities himself and demanded to be arrested

He now faces five years in Jail for attempted robbery.