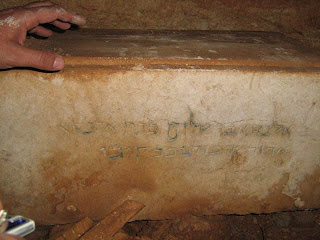 Israel Antiquities Authority is reporting the discovery of seven ossuaries in Jerusalem. They were found in a rock-hewn burial cave in the Qiryat Shemuel neighborhood of Jerusalem. The cave plan and the style of the ossuaries suggest to archaeologists that the complex and its contents should be dated to the first century, close to 70 CE.
Of particular interest is a well-preserved inscription on the side of one of the bone boxes. It is in legible Hebrew and the letters show residue of a blue dye.
The inscription has been translated as a warning to grave robbers. It says "Cursed is the one who casts me from my place." Apparently the warning was unheeded or the grave robbers could not read it since the contents of the ossuaries had been spilled out and some were smashed.
This leads to a question. Since we often assume that most people in the first century could not read, what would be the point of inscribing a curse that could not be read by potential thieves? A similar inscription comes from tombs that date from the first temple period. One of the tombs was discovered in the Silwan neighborhood of East Jerusalem in 1874 and then uncovered again in 1968. The tomb is commonly associated with Shebna the steward and treasurer of King Hezekiah (Isaiah 22:16). The Hebrew inscription on this tomb reads:
"This is the tomb of yahu who is over the house. No silver or gold is here (but his bones) and the bones of his Amma. Cursed be the man who opened this."
Again, if people could not read, why this warning? I am assuming that those who are most given to robbing tombs are not among the aristocratic elite who would more likely be able to read. So if this is correct, why place a warning on the tomb to would be thieves? To go so far as to even tell them that there is no gold or silver so "don't bother." I realize that in order for a curse to work it did not have to be read/understood by they person that was cursed. But this does not explain why someone would have declared that there is "no gold and silver" in this tomb. Apparently some thieves had enough of a vocabulary to know the words for "gold" and "silver."
Perhaps our understanding of a population's reading level has been influenced by our own modern levels of literacy. We expect everyone to have the same level of functionality as we do. But that seems to be what we overlook. All of the inscriptions that we have from the ancient world suggests that a lot of reading occurred and probably not just by a small select group of elites. There must have been a functional level of literacy that at least kept thieves from robbing graves if they didn't want to get cursed.
I would be curious to hear from anyone on this topic. I am by know means an expert on literacy in the ancient world, but I have yet to be convinced that illiteracy was a rampant as we sometimes suggest.
Posted by John Byron at 12:00 AM