What is the point of agnosticism? 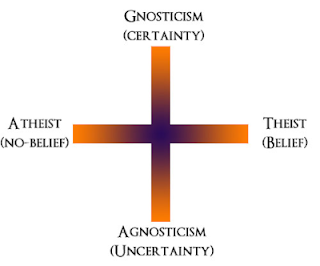 Are you a theist or atheist? Many people claim to be one or the other. It doesn't matter whether or not you attend church regularly or not at all. Scads of people who are not active religiously claim to believe in God. A quick Google search will reveal dozens of newspaper articles with statistics that claim upwards of 90% of people living in the USA believe in God. I suspect the numbers are lower elsewhere. On the other hand, there are people who do not believe in God which means they are somewhere in the minority (less than 10%).
Then there are those who we accuse of hedging their bets. The agnostics. They have concluded that they are unsure whether or not God exists since it is impossible to prove it either way. At times this has been held up as the thinking person's approach to religion and science. The term was apparently first coined by Victorian evolutionist Thomas Henry Huxley as a way to refuse to take sides between the claims of the church and the claims of science.
Nowadays atheism is sexy. People like Dawkins and Hitchens are the rock stars of atheism. They publish popular books and hold public speaking engagements. It seems that being an agnostic is a choice opted for by relatively few.
Robin Le Poidevin has an interesting piece on the OUP blog about agnosticism today. He makes a few important points that I summarize below.

Poidevin concludes with the following thought:

Perhaps God is like that: his understanding and capacities may be infinitely complex, but the underlying nature that gives rise to that complexity may be relatively simple. If so, then it isn’t a given that the probability of such a being is enormously improbable. And if God is not clearly improbable, then atheism is not the default position. Rather, agnosticism is. If, before we start to look at the evidence, the hypothesis that God exists is initially no less probable than the hypothesis that he doesn’t, that neither atheism nor theism has a head start, so to speak, then we should keep an open mind, rather than be atheists until presented by overwhelming evidence for God.

So what is the point of agnosticism? That it stands for open-mindedness, for a willingness to consider conflicting perspectives, for tolerance and humanity. It may even be the basis for a religious life.

What do you think? Can agnosticism be the basis for a religious life?
Posted by John Byron at 12:00 AM