Esther: The Making of a Woman 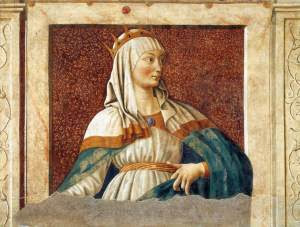 Myrto Theocharous is a friend Lori and I met while spending time in Cambridge a couple of years ago. She was working on her PhD. She recently moved back to her native Greece where she is teaching at the Greek Bible College in Athens.
She has an interesting post today on Esther and becoming a woman of God. Among the many good things she has to say there is this paragraph.

The powerful men of this world, as the book begins, assemble to ensure that women end there, in blind obedience to the orders of man, devising ways to enforce it with all their might. But that is just the beginning of the book. It does not stop there.

The Esther of God does not reject man but she draws him into her history making, she opens up avenues for him to do justice.

Myrto has some keen insights about how a godly woman uses the powerful men of her world to bring about justice. Read the rest of her comments here.
Posted by John Byron at 1:00 AM