How many versions of the Bible do we need? Or Why the Bible makes good economics. 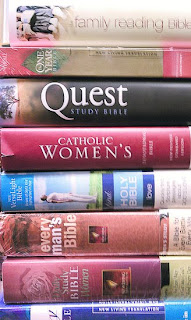 I ran across this article in a Kansas City newspaper. I found it interesting since it talks about the economics of Bible publishing. Perhaps they read my blog asking whether we have too many translations and were inspired to write this article. :)

If you stacked all the Bibles sitting in American homes, the tower would rise 29 million feet, almost 1,000 times the height of Mount Everest.

More than 90 percent of American households own a Bible, and the average family owns three, according to pollsters at the Barna Group. The American Bible Society hands out 5 million copies each year; 1.5 billion Gideon Bibles wait in hotel rooms worldwide.

“Bibles are in many ways a cash cow,” said Phyllis Tickle, a former longtime religion editor at Publishers Weekly. “The Bible is the mainstay of many a publishing program.”

However, some Christian scholars wonder whether that popularity can sometimes be a bad thing, as a major new translation and waves of books marking the 400th anniversary of the venerable King James Bible inundate the market this fall.

Read the rest of the article here.