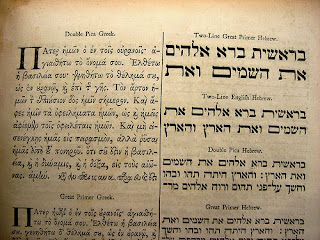 It is the beginning of term at Ashland and although I am not teaching Greek this year I am still hearing the question, why do I need to learn Greek or Hebrew?

Over the years I have swung between the extremes. On the one hand, I have mounted a vigorous defense of biblical languages in a seminary curriculum. On the other, I have privately wished that the only students in my Greek class were the ones that chose to be there.
The question is an important one. The modern pastor is very busy and is more of a general practitioner than a specialist. Working with languages takes time. Although we teach students Greek and Hebrew few have the time week in and week out to put in the kind of effort required to translate the chosen passage for the Sunday sermon. Most pastors do not have a large church staff if any at all. This means that they are in constant demand and are often propelled from crisis to crisis. While weddings are usually planned months in advance funerals are not. It is common for a pastor's normal week to be "interrupted " by a death in the congregation, a family that is falling apart, or some other emergency. And of course this does not include the pastor's family.
Of course there are many good translations to which the pastor will turn. In this case they may not translate their selected passage, but they have the ability to work with some quality commentaries that deal with the original languages. But this leads to the question of how much students need to study the languages to function.
One problem that I have often observed is that studetns are often better in one language than the other. Someimtes this depends on which language they took first. A student who takes Hebrew first may experience language fatigue when it comes time to take Greek next year. It is not uncommon for a student to leave seminary with more competence in one of the two languages. Rarley do they return to studying languages after seminary to improve the one in which they are deficient.
And what about the problem of the Septuagint (LXX), the Greek translation of the Old Testament? I have to admit that at times I see a disconnect between our teaching of Hebrew to Christian students who will use the New Testament. Better than 90% of the Old Testament quotations in the New Testaement come from the Greek version rather than the Hebrew. And the differences between them can be significant. If you use the Hebrew Bible, for instance, there is no virgin birth for Matthew to refer to in Isaiah. If we are reading the Bible as Christians, than why don't we read it in the language that Paul and others used which was, for the most part, Greek (LXX) rather than Hebrew.
I also wonder about what we as professors require versus what we actually practice. I am aware of many a New Testament scholar who would defend the need for students to learn Hebrew, but cannot read it themselves. I am bothered when we insist that our students be able to do something that we cannot. For the record, I have kept up on my Hebrew, but only after I was personally convicted by the above type of situation. I realized my Hebrew was slipping and concluded that if I wanted my students to read Hebrew I had better be able to read it too.
Added to all of this is the fact that many seminaries are dropping the language requirements. It is possible to get an MDiv without any Greek or Hebrew. And these courses are not being replaced with more Bible. This strategy is being used to shorten the total hours required to earn the degree. Students take 4-6 less classes and spend less money.
What are your thoughts? Are original languages important to ministry formation? Should seminaries continue to compel students to take Greek and Hebrew?
Posted by John Byron at 12:00 AM