Creation Untamed V: God, Faith and the Practice of Prayer. 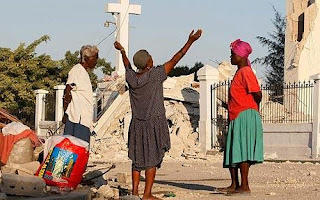 This is the last installment on Fretheim's book Creation Untamed. In the final chapter he looks at how faith and the practice of prayer are related to suffering. In the context of natural disasters it is not uncommon to hear prayers offered to God. In the wake of an earthquake we might hear someone ask God to help them. Or adversely they may ask why God did not help them. Sometimes people pray that God would send rain to break a long drought. Other times we might hear of or see people who pray that God turn a storm from the path it is taking in order to protect their community. The question is , of course, does God hear any of these prayers. And if so, where are the answers?

Fretheim considers such questions by first offering a definition of prayer. He understands prayer as communication between believers and their God in a relationship of consequences (p. 124). And how one thinks about prayer and practices prayer depends a great deal on how one views God (p. 129). On the one hand, we might see God as an uninvolved, even uninterested, observer. On the other, we might see God as a super hero with whom there are no restraints. Anything can be accomplished. But Fretheim suggests that such visions of God skew the biblical presentation of God in regards to prayer (p. 131).
Fretheim insists that we must understand that God interacts relationally and that God has established a genuine relationship with creation. This means that in the case of prayer humans have a say. God wants to and does hear from us (p.133). But such a posture on the part of God involves some risk. "By giving us speaking privileges, God makes God's self vulnerable" (p. 133). "Prayer is a form of power given to us by God." Though God does not give up the situation, God shares power with us and we can then act in concert with God rather than in competition with God (134).

This leads to what we expect from prayer. Is it answers or response? Quite often are prayers are such that they only solicit an answer from God and God's answer is either yes or no. But in the Bible the model we have is response. Quite often the Psalmist will urge God do something. This introduces an open-endness to the situation. God takes human concerns into consideration and provides a response, not just an answer.
And numerous are the reasons that our prayers are not responded to in the way we might like. It might be hindered by our own sin or that of others. The realties of life and the randomness of creation might hinder God's response to us (p. 145). We may think that all that is at work in a given situation is God and our prayers. But there may also be a multitude of factors that resist God's will. And, Fretheim says, "Gods heart is the first heart to break; God's tears are the first to flow" (p. 145).
Prayer then is not a way to garuntee an answer, response or cure. It is a God-given way for us to make a situation more open for God, to give God more room to work. Prayers effect the outcome of the future, Fretheim argues. But so also do the actions of humans. And therefore the shape of the future depends as much on us as it does God (p. 147).
As I was digesting this final chapter I was trying to think of examples of how prayers to God, in the case of a natural disaster were/are hindered by humans. The situation in Haiti came to mind. The earthquake that devastated Haiti happened 10 months ago. Yet, almost none of the monies promised from donor nations has reached that tiny country. Most people are still living in make-shaft refugee camps. This should be particularly embarrassing for the USA since Haiti is in our backyard and we have a long history of interaction/interference with that country.
Last week Haiti was hit by flooding as hurricane Tomas passed by. The results? More death and more disease. This seems to be a good example of what Fretheim is talking about. I am sure many people in Haiti prayed that Tomas would not come there way. And yet it did and worsened the tragedy. But can we blame God for this situation when our actions (or lack there of) have done nothing to reduce the suffering there? Perhaps we have been a hindrance to God and the prayers of people in Haiti?
Posted by John Byron at 12:00 AM