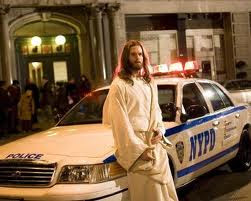 I ran across this in the in the UK Telegraph.

Store detectives at Christmas markets in Austria are being disguised as the baby Jesus to catch shoplifters and pickpockets.

In the German-speaking world, the Christ child is usually played by women and is the traditional bringer of Christmas gifts.

Church officials have criticised the idea of disguising staff as the Christ child to catch thieves.

But a spokesman for the city council in Weitra, Austria, said the detectives were "perfect for keeping an eye out for petty crooks".