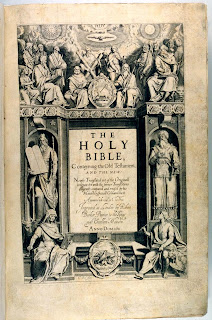 2011 will mark 400 years since the King James Bible was first published. Of the many English translations of the Bible that have been produced, none has been as enduring and influential as the KJV. In honor of the anniversary organizations across the English speaking world are planning to host numerous events. The 2011 Trust has been spearheading many of the events. The BBC has this say about the celebration:

It has been described as the single most important publication in whole of history.A series of events are underway to mark the 400th anniversary of the King James Bible. This was the version of the Holy Bible published in 1611, known as the King James' version. In the first decade of the 17th century, it took the new King James from Scotland to hammer out a Bible that endured. "It is one of the first British things to be made," said Glasgow-born Neil MacGregor, fresh from his work with A History of the World in 100 Objects. "It was made by the whole island to be used by the whole island." Now it is used by the whole globe. The last Harry Potter book sold 44 million - the Bible has sold 2.5 billion some say, or six billion, say others. The Authorized Version today is not the text published in 1611. Hundreds of changes in vocabulary, grammar, spelling and punctuation have been made.

In honor of this anniversary, Ashland Theological Seminary is planning a series of events to celebrate the Bible in English. Scheduled events will include lectures and an exhibit of ancient Bibles and biblical manuscripts. The events are as follows:

What Translation is Right for me?

In addition to the presentation series, a museum featuring rare and unique items spanning more than 2,000 years of Bible translation and 500 years of printing history will be available to visitors. Among the many objects on display are fragments from the Dead Sea Scrolls ca. 200 BC, a copy of the book of Exodus in Greek ca. 300 AD, and a Hebrew Torah scroll from 1492. See a copy of a Great Bible from 1566 and a Geneva Bible from 1580. Learn the story behind the Vinegar Bible from 1717 and the Gun-Wad Bible from 1776. The museum’s extensive display will include pages from the Wycliffe (15th century), Luther (16th century), Tyndale (1541) and King James (1611) Bibles.

For More information visit the Ashland Theological Seminary web site. We will be hosting various groups to tour the museum. Call the seminary at (419) 289- 5462 if you would like to set a time to bring a group for a tour.