Mystery Verses of the Bible 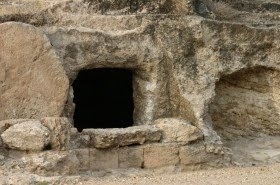 Over the years I have come across some verses in the Bible that strike me as just plain odd. I cannot figure out what they mean much less why the author included them. With this in mind, I decided that from time to time I would touch on those verses that are perhaps ambiguous, confusing or just plain bizarre.

Over the years these Matthew 27:51-53 has raised more questions than answers for me.

At that moment the curtain of the temple was torn in two, from top to bottom. The earth shook, and the rocks were split. The tombs also were opened, and many bodies of the saints who had fallen asleep were raised. After his resurrection they came out of the tombs and entered the holy city and appeared to many. (NRSV)

I am never sure what to make of these verses. With the exception of the veil being torn, everything else is unique to Matthew’s Gospel. What is particularly odd is the statement about bodies of saints being raised and appearing to people in Jerusalem. While I have occasionally heard these verses preached, there are a number of questions that they raise.

1.Since the saints seem to have been raised when Jesus died and did not appear until “after his resurrection,” where were they for three days? Were they sitting in their tombs waiting until Sunday?

2.If they did go into Jerusalem and appear to people, what happened to them? Did they die again? Were they taken up to heaven? Are they still walking around today?

3.If such an event did happen, why does no one else in the New Testament mention it? This seems to be so fantastic that it surely would have caused a stir among the early followers of Jesus and one would expect Paul to list these “raised saints” among the witnesses to Jesus’ resurrection in 1 Cor 15:5-8.

New Testament commentators are not always helpful. They usually label these verses as “strange,” “peculiar,” or “mysterious.” But many do not address the bigger question of historicity: did this event actually happen. I will tip my hand and admit that I have my doubts. I wonder if perhaps Matthew is doing something theological here.

Since this only occurs in Matthew’s Gospel and he places it immediately after the death of Jesus, it seems likely that Matthew is making a theological statement about the significance of Jesus’ death. The raising of the dead suggests that Jesus’ own death broke the power of death over them. Their appearance in Jerusalem is twofold. It may be an allusion to the vision of dry bones in Ezekiel 37:12 which states: “Therefore prophesy, and say to them, Thus says the Lord God: I am going to open your graves, and bring you up from your graves, O my people; and I will bring you back to the land of Israel.” Matthew routinely takes Old Testament passages that applied to Israel and reapplies them to Jesus (cf. Matt 2:15 and Hosea 11:1) and this may be another instance. Second, the fact that the “raised saints” make no appearance in Jerusalem until after Jesus’ resurrection recognizes that Jesus was the first among many to be raised from the dead.

Is it possible that there is a historic core to this story? Yes. In his commentary on Matthew, Donald Hagner suggests that perhaps there was an earthquake in Palestine around the time of Jesus’ death. The earthquake may have caused some tombs to break open which suggested resurrection to the witnesses. Matthew incorporated these stories as a foreshadow of the eventual resurrection of all saints empowered by the resurrection of Jesus (p. 852). Thus, it is possible that Matthew has woven together scripture (Ezk 37:12), a historical event (the earthquake), and the Jewish/Christian hope of resurrection to create a rich, theologically symbolic picture of the significance of Jesus’ death and resurrection.

What do you think? I would be interested to hear your thoughts and comments.
Posted by John Byron at 9:36 AM 12 comments:

Email ThisBlogThis!Share to TwitterShare to FacebookShare to Pinterest
Labels: Mystery Verses of the Bible 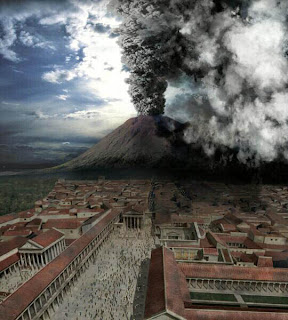 There is an interesting article in the current issue of Biblical Archaeology Review. Hershel Shanks looks at the literature that was written around and in response to the destruction of Pompeii. The Roman city was destroyed when Mount Vesuvius erupted suddenly in 79 CE. Shanks wonders whether some Jews interpreted the city’s destruction as God taking vengeance on Rome for destroying Jerusalem and the temple. There are some remarkable coincidences that could lead one to think this way. (1) Titus was general of the Roman army that destroyed Jerusalem and looted its temple. (2) This event was considered so significant that Titus memorialized the destruction in the now famous Titus Arch, which depicts the temple treasures being carried away (see the picture above). (3) Titus had only become Emperor of Rome in April of 79 CE, a few short months before Pompeii was destroyed.(4) According to Josephus, the temple was destroyed in August of 70 CE and Vesuvius destroyed Pompeii in August of 79 CE.

Shanks article provides some evidence that people living during first and second centuries CE interpreted this event as an act of the gods. There is even in an inscription in one of the excavated homes in Pompeii alluding to Sodom and Gomorrah. Perhaps a Jewish or Christian resident living in the city thought that this was God’s revenge on Rome?

One thing that Shanks’s article helps to highlight is that attributing cataclysmic events to God’s judgment is not new. I am thinking of some of the unfortunate comments that were made about the cities that were attacked during 9/11. But the question that comes to the surface is: If God was taking vengeance for Jerusalem, why Pompeii? Jerusalem was a capital city. Why not destroy Rome instead? But when living in a time of disaster, people of every era, have sought to explain the seemingly unexplainable. And Pompeii demonstrates that we are not alone in our strivings to understand the world in which we live.

Incidentally, next week (July 20) will be the day that Jews mark the destruction of both temples, one by Babylon and one by Rome. The day is called “Tisha B'Av” and is a time for Jews around the world to consider the various calamities that have effected them as a people.
Posted by John Byron at 8:30 AM 4 comments: 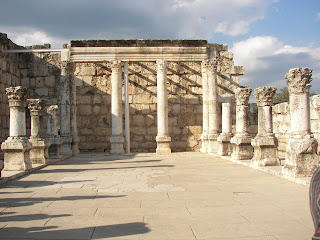 Archaeologist have discovered a synagogue in the Galilee region of Israel. This adds to the growing list of synagogues that have been uncovered in the last 30 to 40 years. This synagogue dates from around 400 CE and provides evidence for a strong Jewish presence in the Galilee region, which is where many Jews settled during the Roman period following the destruction of the Jerusalem temple in 70 CE. There are still very few known synagogues from the first century. But perhaps that is because we are looking for more formal structures like the one found at Horvat Kur. With the exception of the structures in Gamla (Golan Heights), Magdela (Sea of Galilee), Masada and the Herodium (Judean Wilderness), archaeologist have yet to uncover a synagogue where we can confidently state "Jesus taught here". The structure in Capernaum (pictured above), which is a major tourist attraction, also dates from the late Roman period, but its foundation is from an earlier structure that may date closer to the first-century. It is quite possible that while the temple was still standing in Jerusalem that most synagogues within Palestine proper were more informal structures or even simply houses where people met. The Greek word "synagogue" simply means "gathering together." While the temple was standing, Jews may have "gathered together" in homes and other simple structures rather than invest in a building that would detract from the purpose and beauty of the Jerusalem temple. Once the temple was gone, however, synagogue buildings would benefit from the attention and monies that would normally have gone to the temple in Jerusalem.
Posted by John Byron at 9:03 AM No comments:

For some time now I have been contemplating starting a blog. My reasoning is that every day I frequent a number of sites that provide information about Biblical Studies, Judaism and Christianity. I am also interested in archaeology. My intention is to use this as an educational platform to help my many students who may not know about much of the information that I uncover or where to find it. I am also aware that each year innumerable blogs are started and abandoned within a short period of time. So I want to be sure to keep up with it if in fact there is any interest. I am not sure that I will post every day, but I will do my best and see where my experiment takes me.
Posted by John Byron at 8:52 AM 1 comment: