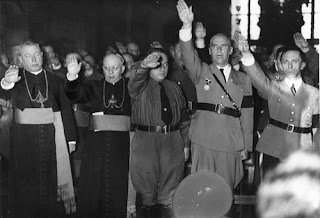 I enjoy reading about the lives of biblical scholars. I have read biographies and/or autobiographies on Albert Schweitzer, Bruce Metzger, George Eldon Ladd, and Jurgen Moltmann. I found the below essay on von Rad to be as inspiring as the others.
Students of church history and biblical studies are familiar with the various attacks that were made on the Hebrew Bible in Hitler's Nazi Germany. Various pressures and acts of legislation were brought to bear on the church in Germany to bring it in line with the Nazi ideology. Resistance to this pressure was expressed through the formation of the Confessing Church. Prominent German theologians also resisted the pressure. Karl Barth and Dietrich Bonhoeffer were among those who helped to draft and sign the Barmen Deceleration which opposed Nazi Christianity. Barth left Germany and Bonhoeffer was executed over a failed attempt to assassinate Hitler. Their actions stood in stark contrast to many other theologians who readily joined the Nazi party and swore loyalty to the party.
Not all German theologians chose to resist the same way, however. Gerhard von Rad, respected Old Testament theologian, resisted the Nazis from within the German academy. In the face of constant pressure from both the government and many of his colleagues, von Rad insisted upon the importance of the Old Testament for understanding Jesus. While the German church and many theologians claimed that one could understand Jesus without the Old Testament, von Rad argued the opposite.
On academia.edu, Bernard M. Levinson has uploaded an essay entitled "Reading the Bible in Nazi Germany: Gerhard von Rad's Attempt to Reclaim the Old Testament for the Church. In it Levinson examines von Rad's scholarship in the Nazi German context. Here is an excerpt.

Although von Rad had completed his Habilitation (at Leipzig under Albrecht Alt), it seems likely that his appointment to Jena had little to do with academics, but rather was based on an assumption that he was a member of the Nazi party and that he sympathized with German Christian ideology. Several factors contributed to this impression. One was almost certainly his early association with Gerhard Kittel, the Protestant theologian whose devotion to National Socialism has long been recognized. Von Rad served as OT edi tor of the influential Theological Dictionary of the New Testament (Theologisches Wörterbuch zum Neuen Testament). Perhaps the most important factor was von Rad’s early membership in the Sturmabteilung (SA),the so-called brown shirts, which had a quite high middle-class membership, including theology professors. I am not particularly troubled by this membership, which may have been motivatedmore by professional necessity than by personal allegiance. He resigned from the SA in 1937. In any case, even before he went to Jena, von Rad was giving public lectures stressing that there is no access to Christ except through the OT. Had this material been read, it is hard to imagine that he would have been appointed.

The use of ideology as the primary qualification for academic office continued with the next appointment, Heinz Eisenhuth, in 1937 as Professor of Systematic Theology. Walter Grundmann, the author of Die Entjudung,was appointed to the NT Chair without his Habilitation, and before the publication lists of two much more qualified candidates had even arrived, let alone been discussed. Von Rad fought a losing battle in resisting faculty appointments of this kind, fruitlessly complaining to the State Ministry, who of course supported the process. In this way, by 1937, the radical German Christian Church movement controlled three of the six academic chairs in Jena’s Faculty of Theology. They were often able to force a majority that effectively controlled the direction of the Faculty of Theology, leaving von Rad and Waldemar Macholz, Chair of Ecumenical Studies, as minority dissenters.

The majority within the Faculty of Theology began systematically to reshape—and subvert— the historically rich German theology curriculum. Hebrew was the first target. Jena became the first theological faculty in Germany to eliminate the requirement for theology students to study Hebrew. In announcing this resolution, the faculty explained that in the study of Jesus Christ, the study of the OT could be set aside. Von Rad and Macholz opposed this move, arguing that the OT was critical to understanding Jesus, but once Macholz retired in 1938, the resolution easily passed. That retirement left von Rad completely isolated in his passionate commitment to the OT as Christian Scripture.

You can read the rest of the essay here.
HT: Jim West
Posted by John Byron at 12:00 AM