Tomb of Emperor Caligula Discovered (Or was it?) 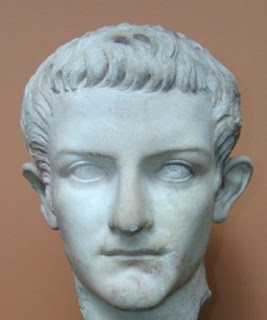 The Guardian is reporting the discovery of the tomb of Gaius Caligula. Apparently, the tomb was discovered not by archaeologist but by a thief who was arrested while trying to smuggle a statue from the tomb.
The former Emperor of Rome is remembered for being almost as crazy as Nero. He is remembered by scholars of the Second Temple period for his attempt to place an image of himself in the Jerusalem temple. Mercifully, he died before he could force its installation. The Jewish philosopher, Philo of Alexandria, was one who argued against some of Caligula's religious overreach in his Embassy to Gaius.
Here is what the article has to say.

The lost tomb of Caligula has been found, according to Italian police, after the arrest of a man trying to smuggle abroad a statue of the notorious Roman emperor recovered from the site.

After reportedly sleeping with his sisters, killing for pleasure and seeking to appoint his horse a consul during his rule from AD37 to 41, Caligula was described by contemporaries as insane.

With many of Caligula's monuments destroyed after he was killed by his Praetorian guard at 28, archaeologists are eager to excavate for his remains.

Officers from the archaeological squad of Italy's tax police had a break last week after arresting a man near Lake Nemi, south of Rome, as he loaded part of a 2.5 metre statue into a lorry. The emperor had a villa there, as well as a floating temple and a floating palace; their hulks were recovered in Mussolini's time but destroyed in the war.

The police said the statue was shod with a pair of the "caligae" military boots favoured by the emperor – real name Gaius Julius Caesar Augustus Germanicus; as a boy, Gaius accompanied his father on campaigns in Germany; the soldiers were amused he wore a miniature uniform, and gave him his nickname Caligula, or "little boot".

The statue is estimated to be worth €1m. Its rare Greek marble, throne and god's robes convinced the police it came from the emperor's tomb. Under questioning, the tomb raider led them to the site, where excavations will start today.

Here is an update thanks to Jeremy O, who left a comment below. Mary Beard at the Times is casting doubt on the claim that this is Caligula's tomb. Beard is professor of Classics at Cambridge. Here is what she has to say.

The news this morning is full of the "discovery" of the emperor Caligula's tomb at Nemi, by the lake about 30 kilometers out of Rome. The details are pretty murky. The police apparently arrested a guy who was loading a statue of the monster young emperor into the back of a lorry.

I haven’t seen a picture of this yet. But how do we know it was Caligula? Because, they say, it was wearing the 'caligae" or sandals that gave the emperor his nickname (his 'real' name was Gaius). Errr? Aren't there loads of Roman statues that wear these?

And why do we think that it marked his tomb?

Simple. Because it makes a good story that gets a load of press coverage for the discovery made by these no doubt brave policemen (the illicit antiquities business is probably second only to drug running in its nastiness).

All the evidence we have from the ancient world suggests that this cannot be so.

Caligula was assassinated in his palace on the Palatine Hill in Rome in 41 AD. According to Suetonius' Life (chap 59), his body was taken to the horti Lamiani, the site of an imperial pleasure gardens on the Esquiline Hill. There he was quickly cremated and buried a light covering of turf. Later on his sisters returned, to cremate and bury it properly.

There is no suggestion whatsoever, so far as I know, that this burial was at Nemi, or that it was a grand tomb (the Latin just says "buried", sepultum). True, Caligula had a big villa there, but it is almost inconceivable that this assassinated symbol of imperial monstrosity would have been given a grand monument, plus a big statue there.

Besides there is no evidence for that whatsoever.

Much more likely is that he had a modest burial in or near the horti Lamiani, or -- as some people think -- that he was slipped into the big Mausoleum of Augustus (where many of the imperial family ended up).

Email ThisBlogThis!Share to TwitterShare to FacebookShare to Pinterest
Labels: Archaeology, In the news