Do we need more accessible language in baptism services? 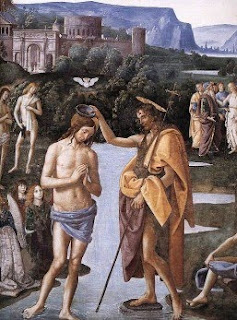 Well, some in the Church of England seem to think so. Reuters is reporting that members of the Church’s General Synod, agreed that the Liturgical Commission should provide supplementary material to help prevent the eyes of worshippers “glazing over” during important parts of the service.”

The problem according to Tim Stafford, author of the motion, is that

“parts of the service were difficult to use “without seeming inappropriately schoolmaster-like”, he said. Stratford said he did not disagree with the words currently being used, such as “I turn to Christ, I repent of my sins, and I renounce evil.” “But it sounds to many as if the church wants an entirely religious response — removed from our behaviour, actions and conversations”. Instead, he wanted words that showed Christ’s neighbourly love. “Not inquisitorial, but aspirational.”

I thought renouncing evil and repenting of sin was a religious response that included our actions, behaviors and conversations. I would hope that one who goes through this process would, in-turn, show Christ’s neighborly love to others.

The problem seems to arise from the lack of biblical and theological literacy among those seeking entrance to the church.

Stratford said many people today did not have enough background in the Bible to understand the images used in the current baptism services. This was “not a plea for a prayer in Scouse, but for a prayer that the majority of non-theologically-versed Britons would understand.” He gave the following as an example of what he called “problematic sentences”:

Through water you led the children of Israel from slavery in Egypt to freedom in the Promised Land.
…..
In it we are buried with Christ in his death. By it we share in his resurrection. Through it we are reborn by the Holy Spirit.

He suggested replacing that with a prayer that dropped the Biblical references but kept the meaning:

Heavenly Father, bless this water,
that whoever is washed in it
may be made one with Christ
in the fellowship of your Church,
and be brought through every tribulation
to share the risen life that is ours in Jesus Christ our Lord.

Hmm, so let me see if I get this right. We have an entire population of biblically and illiterate people who want to have their children baptized into a faith of which the parents have little or no knowledge. Therefore, rather than working harder to educate them about the important symbolic connections between the Exodus, baptism and the resurrection, we will instead change the wording. It is not that I have any particular problems with the wording of the proposed prayer. But I am curious why we are letting the tail wag the dog? Perhaps the baptized will pick up some of this information along the way as they attend Sunday school and catechism classes as they prepare for confirmation. But I wonder how many who are baptized actually ever make it that far.

You can listen to the synod debate the motion here.

Email ThisBlogThis!Share to TwitterShare to FacebookShare to Pinterest
Labels: Rants