Infertility and the Bible 6: Options Available to the Childless - Adoption 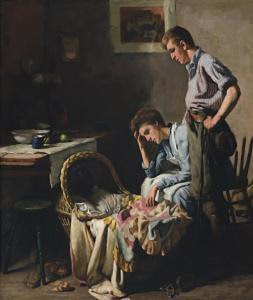 Last week we looked at the various medical and magical options available to the childless woman/couple. This week we look at adoption in the ancient world and its almost virtual absence in the Bible.

When prayers, medicine and magic did not work the childless couple might choose to adopt. Since the ultimate function of marriage was to produce an heir, adopting a son was one way to fill that need. A number of adoption contracts from Nippur reveal how widespread this practice was. One damaged tablet reads: “[ ] son of Inanna- [ ] has adopted as his son (or has been adopted as a son by) [ ] son of Siyatum and had made him his heir” (SAOC 44 10).[1] Another contract relates how a husband and wife adopted two brothers as their heirs. The contract specifies that the older brother will get a preferential share first, and then the rest will be divided between the two brothers. A stipulation is included, however, stating that if the two brothers should ever say “You are not our father, you are not my mother”, the inheritance would be forfeited. Similarly, if the adoptive parents should declare “you are not our sons” they forfeit their house and lands and pay a fine (BE 6/2 24).[2]

Another contract containing similar stipulations provides a smaller fine against the parents should they break the contract, but the penalty for the adopted son is more severe. If he should say “You are not my father, you are not my mother,” they will shave him and place a slave mark on him and sell him for silver (BE 6/2 57).[3] While providing homes for orphans was certainly one aspect of adoption in Nippur, it is clear from many of the contracts that adoption was also motivated by economics. A childless couple found a son to retain their property and the child, depending upon his previous socio-economic background, found an opportunity for social mobility.[4] But the penalty stipulations also reveal how seriously the agreement was considered. To have a rejection of such an agreement meant possible social and economic ruin.[5]

Adoption was also common in Egypt and there is a particularly interesting story about a childless Egyptian couple found among the Adoption Papyri. Instead of adopting a son an Egyptian husband, Nebnofre, adopted his wife, Rennofre, making her the sole heir to his property and thus protecting her from social and financial disaster when he died. Rennofre, in turn, manumitted and adopted three children of her female slave.[6] The oldest girl she married to her brother, whom she also adopted. All four children were then allotted equal shares of the inheritance and her brother (now also her son) was charged to care for her in her old age. This adoption story demonstrates the shrewd means to which some couples would go to protect their inheritance. By adopting the slave girl and marrying her to her brother, Rennofre found a way to keep the property within the family while at the same time providing for herself, a childless widow.[7]

Since adoption was a widely used legal institution throughout the ancient world it is somewhat surprising that it is hardly mentioned in the Hebrew Bible.[8] While the New Testament uses specific adoption terminology to explain metaphoric usages of the institution, the Hebrew Bible has no such equivalent.[9]

Unlike the Law code of Hammurabi there are no legal stipulations listed for adoption and there are only two cases in which an adoptive relationship is described and both of these are in the context of a foreign setting. In Exodus 2:10 Moses is adopted by Pharaoh’s daughter and in Esther 2:7 we read that Mordecai raised his niece while exiled in Persia. But the details in both situations make these cases unusual. Moses is not an orphan when he is taken to live as the son of Pharaoh’s daughter. Moreover, he is cared for by his own sister and mother until he is weaned (Ex 2:7-8). Esther is an orphan, but she is raised by an uncle and thus still part of her parent’s family. Added to these is Abraham’s choice of his servant Eliezer of Damascus as heir apparent. The story provides further evidence from the Bible that adoption was an acceptable or at least known method for circumventing the challenges of childlessness (Gen 15:2). But this part of Abraham’s story is only included to reveal God’s promise that Abraham would have a son and that Eliezer would not be Abraham’s heir (Gen 15:4). Consequently, while adoption is attested in the Hebrew Bible, it is not presented as an alternative to childlessness. As noted in the introduction, the only alternative is divine intervention.

Next week we will look at surrogacy.

[1] Elizabeth Caecilia Stone and David I. Owen, Adoption in Old Babylonian Nippur and the Archive of Mannum-mešu-lissur. (Winona Lake: Eisenbrauns, 1991), 43.

[5] The Law codes of Hammurabi, which provide protection for the adoptee, provide insight into who were the candidates for adoption. The sons that have been adopted are not necessarily orphans. Line 185 stipulates that once a son has been given up for adoption, he cannot be demanded back. But if that son should injure his adoptive parents, then he will be sent back to his father (§186). On the other hand, if the adoptive parents do not care for the son then he may go back to his father (§190). That these sons are not orphans indicates the economic and social function of adoption. If the adoptive parents are childless, adopting a son provides them with the needed heir.

[6] Some have suggested that the children were fathered with the slave by Rennofre’s husband, Nebnofre (R.M Janssen, J.J. Janssen, Getting Old in Ancient Egypt, [London: Stacey/Rubicon, 1996], 88).