Infertility and the Bible 8: The Plight of the Childless Widow - Part 2 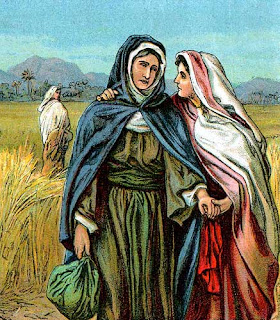 Last week we looked at the difficult social and economic position of a woman who is both childless and a widow. This week we explore the options available to her.

While a widow with children had few options, the options available to the childless widow were even fewer. Without a male representative to arbitrate her way in society, the childless widow was at a severe disadvantage. She may have been able to access her dowry, but it is doubtful whether she would have been able to support herself.[1] In Nuzi, for instance, living off of a dowry was probably not an option for a widow. The dowry was a pre-mortem inheritance given to the bride, but was only a token inheritance and did not form the basis for an independent existence.[2] Thus, the best option for her was to either remarry or find a way to bear a son even though her husband was dead.

One option that is well attested in the ancient world was that of levirate marriage. Coming from the Latin levir for “brother-in-law”, this custom prescribed that when a man died without leaving any children behind, sons in particular, the brother of the deceased was responsible for providing the widow with a male heir.[3] The custom was practiced by the Hittites, is attested among documents from Ugarit, and given legal justification in a number of Middle Assyrian laws.[4] It is also referenced in the New Testament when the Sadducees question Jesus about a childless woman who married and buried a total of six husbands, all of them brothers (Mat 22:23-33; Mark 12:18-27; Luke 20:27-40).

The Hebrew Bible contains a description of this practice in Deuteronomy 25 and the stories of Tamar (Gen 38) and Ruth each illustrate a form of the custom being practiced. According to Deuteronomy 25:5, the custom is triggered when a man dies without leaving a son behind. The focus on the lack of a son suggests that the law would still be in effect even if the dead man left behind a daughter.[5] The woman in question, therefore, is a widow in a particular sense. She is without a male, an heir to her husband’s property, to protect her and care for her and the dead man’s legacy. Deuteronomy also stipulates that the firstborn son from the relationship between the widow and the brother-in-law will succeed in the dead man’s name so as not to “blot out his name from Israel” (25:6).

It seems that the notion of preserving the dead man’s name has more to do with the preservation of his property than his memory. Although the firstborn son of the levir may not take the dead man’s name, he was the heir to his property. This means that a levir would father a child, who stood to inherit his own brother’s property, and yet not benefit from the inheritance. In other words, the levir would be responsible for marrying his dead brother’s widow, providing an heir to her, caring for both mother and son, but not be in control of the property, which presumably he is managing until the son is of age. In such a situation, one could understand why a potential levir might not want to perform such a service. Indeed, the desire for personal gain might also enter the picture. According to Numbers 27:5-11 the brother-in-law of a childless widow stood to gain by being the next in line to inherit the dead man’s wealth.[6] The possibility of such self-interest getting in the way is probably what Deuteronomy has in mind when it allows the widow to publically shame the man who refuses to perform his duty as levir (25:7-10). This would perhaps serve as a deterrent intended to prevent an unscrupulous man from taking advantage of his brother’s widow by positioning himself as the most eligible heir.

The purpose of the law, then, was not only to provide the dead man with an heir but to provide the widow with a son who could inherit her husband’s property and serve as her protector and benefactor. Levirate marriage represented a social mechanism that provided the childless widow a way to be freed from her ambiguous status. The custom produced an heir and gave to the woman the one thing that she had lacked while her husband was alive; a secure place within her husband’s household. A woman’s status within the household depended upon her reproductive role, and until she fulfilled that role she was an outsider to her husband’s family. Levirate marriage is a posthumous recognition of her place within that home.

[5] According to Numbers 27:5-11, if there was a lack of male heirs, daughter could, under certain circumstances, inherit the father’s property. But this is a mechanism that represents the importance of preserving the family’s property rather than an affirmation of the rights of woman to be heirs. Such a conclusion is confirmed by Num 36:1-12 which forbids daughters, who act as heirs to their father, from marrying outside of their father’s tribe.