Love Wins: My Thoughts on an attempt at asking some important questions (Part III) 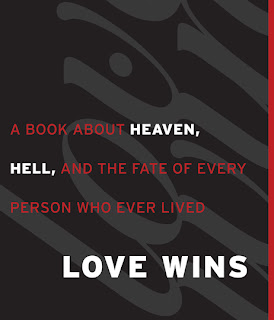 The Concept of Hell and Eternal Punishment

Yesterday I looked at Bell's exegesis in the book. Today I follow the same path by looking at the concept of hell that he lays out.

In the book Bell questions the traditional concept of hell as a place where there is ongoing punishment. Indeed, he rightly questions the medieval images that have long played a part of popular teachings about hell. And he is not the first.

C.S. Lewis in his book The Great Divorce plays with the concept of hell and describes it as a place in which people who have been selfish all of their life continue to live that way, in eternal, personal misery, separated from God and unable, for the most part, to accept God’s love.

Even an Evangelical as popular and well respected as John Stott questioned the reality of hell and whether or not a loving God could/would send people there to suffer forever. Stott’s theology of God’s love did not allow for that and he so adopted annihilationism, the belief that sinners are destroyed rather than forced to suffer forever. It could be seen as a final merciful act of a loving God to those who will never accept that God.

More recently, NT Wright has offered a more nuanced approach to understanding hell. He suggests that regardless of how one understands the nature of “hell,” that ultimately it is possible for people to reject God to the point that they are separated from God. Wright admits that he wishes he could arrive at a different conclusion, but that the witness of the New Testament does not allow another option (Surprised by Hope, 182-83).

So Bell is not alone. And I don’t fault him for speculating and reevaluating our understanding of hell. What is problematic, however, is the way in which he too easily dismisses the biblical idea of hell as a an eternal destination for sinners where they are tormented. Again, I don’t have a problem with him doing this, but it is how he does it.

Rather than use good exegesis and then ask important questions about the cosmology of the ancients and how that should or should not be understood today, Bell turns “hell” into a metaphoric experience here on earth (pp. 70-73). Let me say, I get what he is saying and agree. There are many, many people that are living in a personal hell every day. Some of their own making some because what others do to them. And I believe that we have a responsibility to help free these people from that hell. But this is all Bell talks about. It seems that he thinks by shifting from a few mentions of hell in the Bible to talking about pain, suffering and injustice in today’s world he can answer the question about hell.

Again, I don’t fault him for questioning and reconceptualizing hell. But I wish he would start with good exegesis and then move forward. He seems to too easily dismiss the idea that the Bible suggests sinners will spend time in eternal torment (p. 92). But what he forgets or is unaware of is that the concept of hell in the Bible is drawn from the Jewish thought of Jesus’ day. For instance, a look at 1 Enoch 17-22, a book referenced by Jude (vv.14-15), will demonstrate the concept of a destination for sinners, one in which there is fire and torments, a place to wait for final judgment. It is well entrenched in the thought world of first century Judaism. When he turns Gehenna into a metaphorical place where you “send your garbage” (pp. 68-69) he demonstrates a lack of appreciation for the significant historical and cultic connections to that place that have more to do with its identity as a place of evil and torment than its supposed location as Jerusalem’s garbage dump.

Another thing Bell does is questions the idea of “forever punishment”. He spends a bit of time looking at the Hebrew and Greek terms olam and aion. As Bell correctly points out, sometimes these terms are translated as “forever” in the Bible. Other times as “eternal” and sometimes it simply means “an age” or “period of time.” Bell uses this examination of terms to point out that the time aspects can be fuzzy. More importantly to our understanding of New Testament theology, believers are not waiting for eternal life to begin in the future; it starts now (pp. 31-33; 57-59). Yes, I agree with that. What Bell does not mention or has failed to grasp is that not only is the context surrounding the word important, but so is whether the term (and he focuses mainly on Greek aion) is in the singular or plural. The ancients were well aware of the various nuances of the word. Consequently, when they wanted to express an idea of a “period of time” or “an age” they used it in the singular. When they wanted to express the idea of timelessness, “eternity,” they used the plural form of the term.

One other comment on Bell’s definition of aion. He notes that sometimes it could mean “a particular intensity of experience that transcends time” (p. 57). I am not aware of such a definition nor can I think of any examples that would suggest such. I am willing to see and consider some examples. However, Bell provides none. The only support he provides is an illustration of how one loses track of time when spending time with a lover. He offers no passage to support aion working this way in a particular context.

All of this comes to a head when Bell begins to apply his understanding of aion to the concept of eternal punishment. He looks at Jesus’ story of the judgment and division of the sheep and the goats in Matthew 25:33-46 (p. 91). Bell focuses in on verse 46 and in particular Jesus’ statement about the destiny of the goats. Most translations, as Bell acknowledges, read “eternal punishment.” But he objects to this reading. He looks at the Greek word kolazo which is translated as “punishment” and notes that it is a horticulture term that can also mean “pruning.” He then interprets the aion term as “an intense period of time.” Thus, according to Bell, those who are sentenced to this fate are not being sent off to “eternal punishment,” but to an “intense experience of correction” (p. 91). In other words, there is no eternal punishment, but a chance for people to learn what they did not in life.

There are multiple problems with Bell’s reading here. First, yes, one of the definitions of kolazo is pruning. But this is not a biblical definition and there is not one example of the term being used this way in the Bible. Bell has picked a meaning that suits him. Second, aion appears here in the plural, not the singular, which strongly suggests that Matthew had “eternity” in mind here and not “an intense period of time.” Third, there is an even more important point that Bell does not comment on. Jesus’ words about “eternal punishment” are followed by the phrase “life eternal,” which is what is given to the sheep. This is a deliberate parallelism that is intended to contrast the fate/destiny of the two people. If Bell’s interpretation is followed then one has to wonder if the righteous will only experience life for an “intense period of time” and then, like the goats, expect something else. Bell’s reading here, as with his reading of the Sodom and Gomorrah passages yesterday, is simply unsustainable.

I applaud Bell for wanting to ask the hard questions about hell. I just wish he had done it. I wish he had taken the time to do some careful exegesis and then looked at the results. It may even be that he found the Bible did contradict his position. Fine. But at least acknowledge that and then explain why you question that particular teaching and/or why it may not apply to us in the modern age. Bell too quickly dismisses the biblical concept of hell and uses shoddy exegesis to prop up his conclusions.