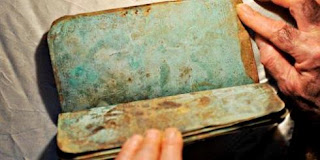 The Daily Mail is reporting on the discovery of some 70 lead codices that purportedly contain stories about Jesus' later life. Here are some excerpts from the article, brief as it is.

Artifacts discovered in a remote cave in Jordan could hold a contemporary account of the last years of Jesus. The find of scrolls and 70 lead codices - tiny credit-card-sized volumes containing ancient Hebrew script talking of the Messiah and the Resurrection - has excited biblical scholars. Much of the writing is in code, but experts have deciphered images, symbols and a few words and the texts could be 2,000 years old.

Many of the codices are sealed which suggests that they could be secret writings referred to in the apocryphal Book of Ezra - an appendage to some versions of the Bible. Texts have been written on little sheets of lead bound together with wire.

A number of experts have examined the writings, including Margaret Barker, a former president of the Society for Old testament Study with a renowned knowledge of early Christian studies.

Ms Barker said: 'There has been lots of shenanigans. Vast sums of money have been mentioned with up to £250,000 being suggested as the price for just one piece.' She has had access to photographs taken of the codices and scrolls, and is wary of confirming their authenticity.

But she said if the material is genuine then the books could be 'vital and unique' evidence of the earliest Christians. 'If they are a forgery, what are they are forgery of?' she said.' Most fakes are drawn from existing material, but there is nothing like this that I have seen.'

However, Philip Davies, emeritus professor of biblical studies at Sheffield University is convinced the codices are genuine after studying one. He has told colleagues privately that he believes the find is unlikely to have been forged

Read the whole article here. There is also a story about the codices in the Jewish Chronicle.
It will be interesting to see how this plays out over the next few months and years. There have been many forgeries over the last century. Some were created by those seeking money. Others were created by scholars in an apparent attempt to boast their prestige, or at least to fool their colleagues. I have great respect fro Phillip Davies, but will wait to see what to hear the final determination.
Update: Jim West has provided a link to what is being billed as the official press release concerning what are being billed some as the Jesus Tablets.
Posted by John Byron at 12:00 AM