Update: a Photo of one of the "Jesus Plates" and a question about the number of arms on the menorah

Jim West via Robert Cargill has posted a picture of one of the recently discovered plates. Bob's comments are below the photo. 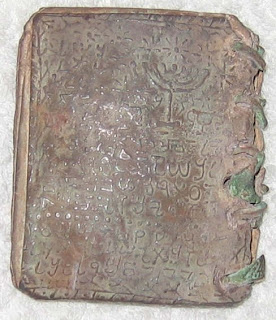 I note that the candleabrum/hanukiah in the picture is 9-branched (8 + shamash), not the typical 7-branched menorah that we find depicted, for instance, on the Arch of Titus, which was erected in 82 CE long after the Maccabean Revolt. Were these 9-branched hanukiot typical at this time? If not, would the presence of a 9-branched hanukiah be evidence of a forgery? Or would this have to be the earliest example of a 9-branched hanukiah? If anyone knows of an earlier hanukiah, I’d be interested to learn.

Bob asks an important question here. I had a quick scan through Rachel Hachlili's The Menorah, The Ancient Seven-Armed Candelabrum (Brill, 2001). She mentions that there are examples of menorot with more or less than seven arms. She lists some on pp. 438-39; 464, 477. Some do come from the land of Israel, although she noted that they are predominately from the Golan (69, 200). Many of these examples come from the 4th-5th century CE, but she also lists some from the 1st century (441-42), which suggests that a nine branched Menorah is not an indicator of a forgery.