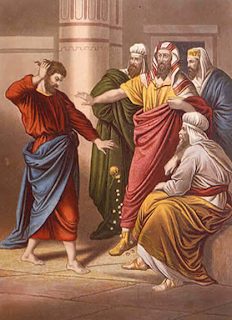 Today is Maunday Thursday. Today the Church commemorates Jesus' Last Supper with his disciples, his moments of anguish in the Garden of Gethsemane and his subsequent arrest and trial.

But there is another part of this day that is just as important to all of these events. It is Judas' act of handing Jesus over to the authorities. Judas' act of betrayal is what starts the whole process leading to Good Friday, the day Jesus was executed.

One question that rises to the top from time to time is: what happened to Judas? Did he repent? Was he forgiven? We can turn to the New Testament for answers, but the evidence is uneven.

n the KJV and NRSV translations of Matthew 27:3-10 we read that Judas "repented" and returned the money he had received in exchange for delivering Jesus to the authorities. The word for repent here, however, is not the typical metanoia but instead metamelomai which usually has the idea of "regret" or "remorse" (cf. Matt 21:29, 32; 2 Cor 7:8; Heb 7:21). With the exception of the KJV and the NRSV, "remorse" and/or "regret" is the translation adopted by most English versions. In my opinion, I think the KJV and the NRSV are correct, even though the typical word for repentance (matanoia) is not here. The story has all of the hallmarks of a repentant person. Judas shows regret/remorse, returns the money (v. 3) and confesses that he has sinned (v.4). Overcome with grief and guilt he goes out and kills himself (v.5). Although suicide is not a typical part of the repentance process, one could argue that it was an extreme example of his remorse that he ended his own life.

If this was the only witness to Judas' end we would be inclined to see him as a repentant conspirator. But Luke complicates the picture a bit for us.

Unlike Matthew, Luke mentions nothing about Judas' fate in the gospel. Instead, he reintroduces Judas in Acts and only after Jesus has ascended to heaven. We learn about Judas' fate as part of side note to the process of choosing his successor. Here we discover that Judas' act was a necessary part of the fulfillment of scripture (Acts 1:16-20). But unlike Matthew, Luke tells us nothing about Judas feeling remorse, confessing his sin and returning the money. Judas has no speaking part in this version of the story. Rather, the narrator tells us that he received a reward for his wickedness and that he committed suicide by falling on his head and spilling his innards.

If we only had Luke's version we would assume that Judas did NOT repent. But Matthew’s version seems to complicate that conclusion. Some will want to harmonize the two stories as a way to flatten out the rough spots, especially the two different descriptions of Judas' death. But even doing that makes it hard to overlook that in Matthew we have a repentant Judas who could expect forgiveness just as Peter did for denying Jesus.

It seems that we have two competing traditions. One knew a story that Judas repented and another that he did not. I sometimes think Luke uses sudden death as a way to prevent characters from repenting. Judas dies without a chance to voice remorse in 1:18-19; Annaias and Sapphira are both immediately struck without a chance to repent (Acts 5) and Herod Agrippa is struck by God and dies (Acts 12:20-23).[1] Perhaps Luke did not want to offer a traitor the status of repentant betrayer?

In the end, Luke's version seems to have won the consent of most. Here is an expanded second century AD description of Judas' death by Papias.

Judas walked about as a great example of ungodliness in this world. His flesh was so swollen, that when a wagon was passing through the street he was unable to pass through; there was only enough room for his head. The eyelids over his eyes, it is said, protruded so much, that he did not see light, and that a doctor could not make his eyes visible with optical instruments. To such an extent was the light shut out from outside. His genitals of indecency were more disgusting and yet too small to be seen. There oozed out from his whole bursting body both fluids and worms. After much suffering and agony, it is said that he died in his own place. And this place is out of the way and the piece of land is uninhabited until now. No one even to this day passes by the place without stopping up his nose with his hands. Such was the opinion spread about the country concerning his body.

Luke may have intended to keep Judas from repentance, but Papias turned it into an art form. Later, Dante provides Judas his own special place in hell with other traitors.

People usually have strong opinions and usually do not see Judas as being forgiven or finding eternal peace. I am not sure what the truth is since the witness of the New Testament is uneven here. I suppose only God knows.

What do you think? Did Judas repent?

[1] It is interesting the in Josephus’ version of this story Herod lingers a few days. Luke’s version would allow for Herod to linger but he uses one of his favorite terms here “immediately” (parachrāma) which suggests that Herod’s end was very swift if not immediate.