Does belief in a loving God lead students to cheat on exams? 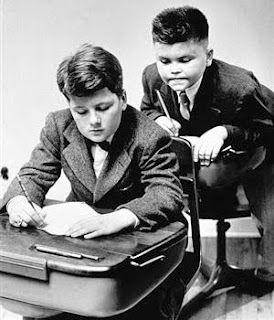 Back in November I posted an interview from the Chronicle of Higher Education with an individual who is a hired pen for students. This person was making a significant amount of money writing papers for college students. While this in and of itself was unsettling, I was even more shocked to learn about the number of papers he had written for seminary students. I complained that these people were cheating their way to ordination and somehow thought that doing ministry was more important than the education intended to help them get there.

Well apparently the problem is a result of one’s theology. According to new research, those who believe in a loving God are more likely to cheat. Here is what the researchers discovered.

In the first study, 61 undergraduates were asked to take a mathematics test on a computer that contained a software glitch. If they failed to press the space bar immediately after reading each problem, the glitch would cause the correct answer to appear on the screen and that just wouldn’t be fair. After taking the test, the students were asked about their perceptions of God.

Of course the sneaky researchers — believers in a benevolent God, no doubt — had peeked to see who had used the space bar and who hadn’t. While they found no differences between self-described believers and non-believers, the psychologists discovered that the students who think of God as angry and punitive were significantly less likely to have cheated.

You can read the full article here.

I will note that the research was compiled from math students rather than those studying theology. But one still has to question: what is wrong when one’s theology leads you to cheat? I suppose I will have to tell my students that God is not as loving as the believed. At least I won’t have to worry about them cheating.