Forget those silly lead codices. We've got the nails from Jesus' crucifixion! 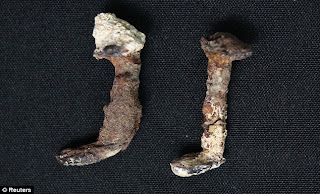 Well folks, it is a week before Easter and the purveyors of hype and pseudo-scholarship are at it again. Forget the Lead Codices. They are old news and probably fakes anyway.
The Jerusalem post and the Daily Mail are reporting that Simcha Jacobvici, A.K.A the Naked Archaeologist, (don't worry parents he is fully clothed for this blog entry) has discovered some of the nails used at Jesus' crucifixion.
Jacobvici has a new documentary coming out on Discovery Channel titled Nails of the Cross. He claims that a tomb discovered in 1990 outside of Jerusalem, identified as belonging to the High Priest Caiaphas, yielded a number of artifacts including two nails. These nails were found among the ossuaries discovered in the tomb. One was found in an ossuary, the other outside of it. The nails were removed from the tomb along with other artifacts and taken to a lab in Tel-Aviv. Jacobvici claims that they "mysteriously disappeared" and tells how he found the missing nails. Ah, conspiracy. Always a good way to promote a story. In an interview for the Jerusalem Post he had this to say about his "discovery."

"What we are bringing to the world is the best archaeological argument ever made that two of the nails from the crucifixion of Jesus have been found," he said in an interview, wearing his trademark traditional knitted cap.

On the other hand, all of the scholars contacted by Reuters expressed doubt about his claims. A more plausible explanation has been offered by one of my former professors, Gabriel Barkay.

Barkay said no proof existed that the pair of Roman nails in the Tel Aviv University lab were the ones found in the tomb of the Caiaphas clan, but said it was both 'probable' and 'possible.' If they were the ones found in the tomb, they could have been placed there for many other reasons, for example after using them to make inscriptions or as a charm to ward off evil, but he agreed the nails were significant and should not have been ignored by the finders.

Of course Jacobvici has not yet said why he thinks these are the nails from Jesus' crucifixion and if they are why would Caiaphas have them in his possession not to mention his tomb! Perhaps Caiaphas kept them as souvenirs?
Perhaps he is a reader of the Wittenburg Door which reported in February of 2008 that three nails of the used to crucify Jesus were for sale on the French eBay site. As the authors of the article notes, if these are the real nails then they have done a lot traveling. The Wittenburg Door provides a brief history of the nails' history from their discovery by Constantine's mother to Hitler.
Hey, has anyone checked the record of Jacobvici's past purchases on eBay?
Don't want to make word for it? Still think there might be some truth to this whole story? Checkout Bob Cargill's blog. He will dissuade you further.
Also, Mark Goodacre posted a Blackadder video dealing with relics.
Posted by John Byron at 12:00 AM

Email ThisBlogThis!Share to TwitterShare to FacebookShare to Pinterest
Labels: In the news/Fake-Archaeology