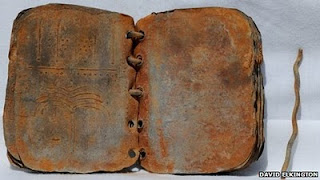 I have been away for the last few days and thus not had the time to devote to blogging that I should. Nonetheless, I have been aware that while the story about the lead codices are being sensationalized by the media, bloggers, many who are also scholars, have not only been cautious but outright skeptical. It looks like it may be coming to a head.
It appears that Peter Thonemann at Oxford had a chance to look at them last year and declared them to be false. Here is what is reported to have said in an email.

The text on your bronze tablet, therefore, makes no sense in its own right, but has been extracted unintelligently from another longer text (as if it were inscribed with the words: ‘t to be that is the question wheth’). The longer text from which it derives is a perfectly ordinary tombstone from Madaba in Jordan which happens to have been on display in the Amman museum for the past fifty years or so. The text on your bronze tablet is repeated, in part, in three different places, meaningless in each case.

The only possible explanation is that the text on the bronze tablet was copied directly from the inscription in the museum at Amman by someone who did not understand the meaning of the text of the inscription, but was simply looking for a plausible-looking sequence of Greek letters to copy. He copied that sequence three times, in each case mixing up the letters alpha and lambda.

This particular bronze tablet is, therefore, a modern forgery, produced in Jordan within the last fifty years. I would stake my career on it.

You can read more about it here. Others are also less than convinced like April DeConick and Jim Davila. James McGrath has noted that there is now a Wikipedia titled Jordan Lead codices where you can read about them and the case for declaring them forgeries. Ian Paul has provided a nice summary as well.
Time will tell what exactly these are and whether or not all or some of them are forgeries. As I warned in a previous post, these are early days and those who are experts in this area need the opportunity to see and study them.
Posted by John Byron at 4:37 PM