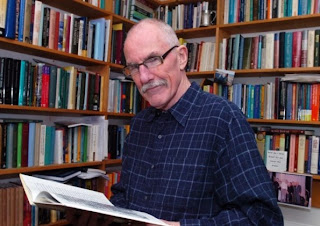 The Telegraph has an interview today with Philip Davies, Professor Emeritus of Sheffield University. Actually, it is less an interview and more of a rehash of the story with what seems to be selectively chosen quotes from Davies.

Here is what Davies is recorded to have said according to the Telegraph. The italicized words in the quote are part of the article's narrative and NOT those of Davies.

“It is extremely exciting and a very curious case - it’s not normal for books to be bound on both sides,” said Philip. “They may be sheets of secret signs and people may have prayed over them.”

“That looks too modern in style for my liking,” said Philip.

“I think some of them may be authentic, and as yet I can’t work out what sort of a hoax they might be.”

“At the moment the codices are hard to reach so it’s difficult for any of us to actually see them at first hand,” said Philip.

“At the moment there is every reason to be extremely cautious.”

Davies is certainly exhibiting the appropriate caution needed here, which has not been the case with the media. But there are still some important questions that need to be answered. Jim Davila asks some important questions in which he requests that someone please publish the tests that suggest that codices (they are not scrolls) go back to the first century. It seems like the story is beginning to die, but I suspect it will be even less interesting after Easter. Unless, of course, there some real evidence id produced demonstrating their authenticity.

Email ThisBlogThis!Share to TwitterShare to FacebookShare to Pinterest
Labels: In the news/Lead Codices