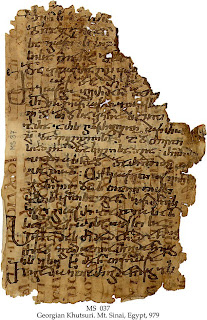 In Early February I posted a piece on the Sisters of Sinai. These two women discovered the earliest copy of the gospels in Syriac during a trip to Saint Catherine's Monastery on Mount Sinai. What they discovered is a palimpsest, a "washed" or "scraped" manuscript that had the original writing erased which allowed the parchment to be reused.
Today a story in the Daily Bruin details how a group of scholars from UCLA are going to the monastery to study another 125 palimpsests.

Leading a team of scholars and researchers, a UCLA professor has collaborated with the Early Manuscripts Electronic Library to begin a five-year project to study the erased layers of text in a collection of ancient manuscripts.

Claudia Rapp, a UCLA history professor, and Michael Phelps, executive director of the Early Manuscripts Electronic Library, will lead the Sinai Palimpsests Project. Together they will study a collection of more than 125 palimpsests, or recycled manuscripts, at St. Catherine’s Monastery of the Sinai in Egypt using imaging technology.

While ink residue from the old text often remains preserved in the manuscript, the human eye cannot perceive the original text as a whole, said Phelps, the project’s technical director.

Using multispectral imaging, a process that involves capturing images of the manuscripts under different wavelengths of light, researchers hope to reveal images of the original text underneath the upper layer of writing on each palimpsest, Phelps said.

You can read the rest of the story here.
HT: The Bible and Interpretation
Posted by John Byron at 8:38 AM

Email ThisBlogThis!Share to TwitterShare to FacebookShare to Pinterest
Labels: In the news/Manuscripts