Resurrection: The Hope of Easter 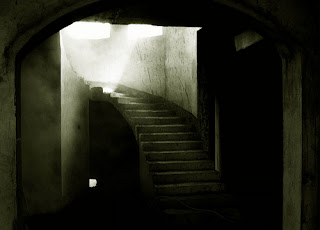 Death and I have had a rather uncomfortable relationship over the years. How else does one describe their "relationship" with death?

I remember the first time I became aware of the concept of death. I was fortunate to know three of my great grandparents all on my father’s side of the family. When the first of them died I was probably no older than three or four. I remember that my parents dressed up and went to the city for the funeral, but I didn’t comprehend the idea of death. The only thing I knew was that I never saw mom-mom Byron again. Within the next seven years I lost my other two great grandparents. This was the first time I went to funerals. I understood a little better now that death meant an end, but I don’t think that I fully comprehended what it means.

When I was seventeen, my grandfather, my mother’s father, died. This time I became fully aware of death. I visited him regularly in the hospital during the summer of 1985 and drove my grandmother back and forth to see him each week. The cancer had taken such a hold on him that I prayed that God would take him quickly. Thus, my first encounter with death as an adolescent evoked from me a cry for mercy. Somehow I saw death as a merciful act for this man who was suffering so much.

But this encounter with death also yielded another realization. I was powerless to do anything. On the day of my grandfather’s funeral my father was a pallbearer. He told me “take care of your mother” as he walked the casket across the street from the funeral home to the church. I put my arm around her and walked her across the street. As I did so she began to cry. I wanted to do something to help, to comfort her, to dry up her tears. But there was nothing I could do. I was powerless.

The next time I encountered death was in 1991. Lori and I went to NYC and decided to visit a great uncle who lived alone in Queens. After several knocks on the door we let ourselves in. It was clear someone was at home, but no one was answering. I found my uncle lying on his bed. He had been dead probably for several days. I came downstairs and told Lori that he was sleeping, but she pressed me to make sure. I went back upstairs and with trepidation checked for a heartbeat and pulse. I remember the fear I felt when I touched him. I learned another feeling about death that day, fear. It was the fear of seeing the person there, but knowing they were not really there. It was a realization that it could happen to me and there was nothing I could do stop it.

When my father died in 1997 both of these feelings came crashing together. I remember putting his casket into the waiting car and watching my mother touch it one last time. She wept there and in our car. Once again I was powerless to do anything. And fear also rose up again, but this time in a slightly different way. I suppose anyone whose parent dies young lives with a nagging fear that they too will die at the same age. My father died at 51 and I will probably feel a lot better once I am a few years beyond that age. But in all honesty, I am a bit fearful and realize that I am powerless to do anything about it.

I suppose this is why I hold onto the hope of resurrection. I realize that people coming back to life is impossible and unreasonable. But that is the hope of Easter. It is putting our hope in that which is unreasonable. Dead people don’t get up to live again. But it is the hope that I have. That this is not the end and that the fear and powerlessness I now feel will ultimately yield to God’s resurrection power.

So on this Good Friday I am reminded of the hope that this day holds. Just as we look through this day to the joy of Easter, I look through my experiences with death thus far with the hope that I will experience my own Easter. Hopefully I will be able to say with Paul: “Where, O death is your victory? Where, O death is your sting?”(1 Cor 15:55). And hopefully in that moment the powerlessness I feel will give way to the power of God and the fear that haunts me will be replaced with joy.