Did Jesus go to hell? 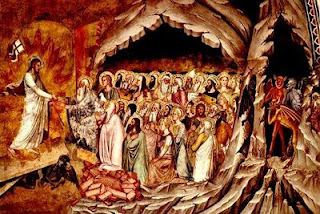 Where was Jesus between Friday and Sunday? This is the question that lays behind the title of today's post. Over the years questions about what happened to those who died prior to Jesus' resurrection has prompted suggestions that Jesus went to hell between Good Friday and Easter, fought Satan and rescued those being held in bondage there.
This idea was eventually enshrined in a line of the apostles creed. The problem, however, is what does the line in the creed mean? For instance, the traditional English version reads: "he descended to hell." Modern English versions, however, now read: He descended to the dead. Modern versions understand the creed to mean Jesus descended into the grave, not hell.
The problem is not any easier to sort out by referring to versions of the creed in Greek or Latin. The Greek version has "he descended unto katotata (lower regions)" while the Latin has he descended into inferna (hell)." While the Latin seems to point to hell, the "lower regions" Greek could simply mean "earth" as in contrast to "heaven." You can compare the Greek, Latin and English versions here.
The Bible is of even less help since there are no clear statements that Jesus went to hell between Good Friday and Easter.
Some will appeal to 1 Peter 3:19-20 where Jesus said to have preached to the imprisoned spirits who disobeyed during the time of Noah. This is interpreted by some as a description of Jesus' time in hell preaching to those who had disobeyed prior to the time of Chirst. But others see it as a reference to the fallen sons of God/Angels in Genesis 6, not a three day tour of hell.
Others will point to Ephesians 4:7-10 which in with a quote of Psalm 68:18 talks about Jesus taking captivity captive and that his Ascension was preceded by his descending to the lower regions. Some interpreters see this as a clear statement about Jesus going to hell and rescuing the captives. But again, it is also possible to read it as Jesus descending to earth and then ascending to heaven.
We could point out more passages that are sometimes used, but the above are the two main passages. The Bible is not clear about any descent into hell. Nonetheless, the belief in a descent to hell has had a long and prosperous history. In a recent article J. Warren Smith and Ben Witherington each explain the long history.

One big concern for the early church — and Christians to this day — is what happened to the Old Testament patriarchs and others who never knew of Christ.

A whole mythology arose about Jesus rescuing people from the netherworld after the crucifixion. The Gospel of Nicodemus, which dates to the third century and did not make the Bible cut, offers a narrative of Jesus retrieving Adam and other Old Testament figures from Satan’s clutches.

Smith describes such imagery to his students as “Christ’s commando raid on hell.” In addition, it was a popular subject for medieval artists.

“What is going on here is Christian reflection on the doctrine of salvation only in Christ, and then trying to figure out where does that leave people who a) haven’t heard about Christ or b) who lived before Christ,” Witherington said.

You can read the rest of the article here. I think you will discover that the belief in a descent to hell has more support in medieval theology and popular imagination than in biblical texts. It is driven by perceived gaps in the text and a desire to answer questions that are never answered in the Bible. It seems the authors of the Bible were more concerned with directing attention towards the resurrection and not some cosmic fistfight between Satan and Jesus. To me, at least, Jesus was dead between Friday and Sunday until he was raised by God.
HT: Ben Witherington.
Posted by John Byron at 12:00 AM