Update on the Jesus Nails 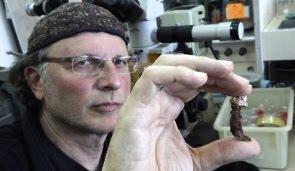 I thought that this story would just go away after Easter, but it’s not. I guess it has yet to air, but the sooner it is on and gone the better.

Since announcing that he has located the nails used in Jesus’ crucifixion, which were discovered in Caiaphas’s tomb, Simcha Jacobovici has been on the defensive from biblical scholars. I have expressed my own doubts here.

As the time approaches for his pseudo-docu-fraud to air, Jacobovici is trying to defend his claims so that the show is not a total flop. Experts are lining up to debunk him and he keeps making more and more ridiculous claims.

Haarettz has an interview with Joe Zias, the director of the Israel Antiquities Authority who says that these are NOT the nails found in Caiaphas’s tomb and that the reason no one knows where the nails are is because they are a common item found in tombs and therefore are not cataloged. But Zias does know the nails that Jacobovici is using for the television show. Zias claims that the nails come from a dig 30 years ago and that they sat in his laboratory for 15 years. Moreover, the nails, which are only eight centimeters long (about 3 inches), are too short to have affixed a man to a cross.

Jacobivici, of course, is having none of this. Here is a quote.

"If you lose your lottery ticket and you hear that I found it and won a million dollars, you will do anything to believe that the ticket was not yours," responds Jacobovici. "There is no logic in his story. On the one hand they say that this is a common find, on the other they remember it well."

"The bottom line is that they lost [the nails] and I found them," says Jacobovici.

But it is even stranger. The article also contains the following claims.

The journalist notes that finding nails in a burial cave is exceptionally rare, and even more so in ossuaries. Nails used in crucifixions also had a special spiritual significance, he says.

This is just outright nonsense. It is NOT rare to find nails in a tomb or near an ossuary since nails were often used to scratch the name of the deceased on the ossuary. Once finished with the nail, the inscriber would simply drop it on the floor. As Zias notes, it is not unusual to find nails in a tomb to the point that they are usually not cataloged. As far as the “spiritual significance” of nails used in a crucifixion, I cannot comment since I am sure that he is making it up and that any significance to such nails was created by later Christians selling “original nails from the cross” during the medieval period.

I will say this about Jacobovici, had he lived 600 years ago, he would have become very rich selling his “artifacts” to the faithful.

Email ThisBlogThis!Share to TwitterShare to FacebookShare to Pinterest
Labels: In the news/Fake-Archaeology