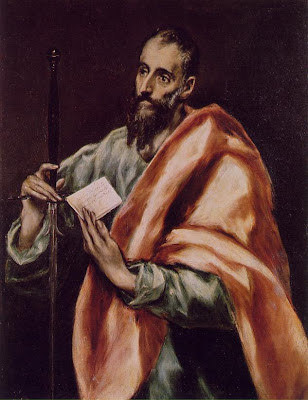 Ken Schenck is a fellow Durham grad and is presently the dean Wesley Seminary at Indiana University. Ken has written numerous books. His most recent one is titled Paul Soldier of Peace. Ken announced the publication of his new book on his blog. He notes that the book is for laypersons, not scholars. But he is certainly bringing important scholarly thoughts to the laity. Here are 11 points that Ken covers in his book and are important to our understanding of Paul.

1. Paul was a Jew, always remained a Jew, always thought of himself as an Israelite, believed eventually that all ethnic Israel would accept Jesus as Christ. Believing Gentiles were grafted in to Israel. The church does not replace Israel.

2. The audience is primarily Gentile in keeping with the fact that Paul is apostle to the Gentiles. There were "conservative Gentiles" such as we find in Galatians, perhaps Romans to some extent, and perhaps Hebrews.

3. The "righteousness of God" primarily refers to God's propensity to save his people and world, although Paul may very well exploit the polyvalence of the phrase to imply our right standing with God at a couple points.

4. Paul is primarily interested in our faith in God. Nevertheless, he does at a couple points speak of faith in Christ and I believe he does start off with a sense of the faithfulness of Jesus, his obedience to death.

5. The phrase "works of Law" does primarily focus on those parts of the Law that most separated Jew and Gentile ethnically. Nevertheless, he does set this concrete debate within a general framework of grace versus earning one's right standing with God.

6. Justification refers to God's declaration of a person being in right standing with him. This is triggered by faith initially apart from anything a person has done, but final justification will not take place without appropriate deeds following. The Gentile in Romans 2 who demonstrates the Law written on the heart is a Gentile Christian who has the Spirit.

7. Paul does not have a rigid sense of penal substitution. He has a rather more loose sense that Christ's death demonstrates God's justice, no doubt accompanied with the rather more unarticulated ancient sense that sacrifices satisfy the order of things, including God's wrath.

8. Paul does not have a full blown theology of total depravity, original sin, or the Fall. Our fuller reading of these things comes more from Augustine and his heirs. A more careful reading of Paul points to a thorough sinfulness in humanity, a cosmic situation in which Sin has power over our flesh, and that this situation is a result of Adam's sin.

9. Paul does not see sin as compatible with the Spirit inside us. Romans 7 is not Paul's current struggle with Sin but the situation of a person who might want to keep the Law but who does not have the Spirit. I further do not think Paul is even remembering his previous struggle. I don't think Paul ever seriously felt like a moral failure at any point of his life. The Spirit empowers a person to keep the core of the Jewish Law, the love your neighbor part.

10. Paul does not connect his predestination language with the rest of his theology. It is a kind of "orphan" in his thought that he does not follow out logically. It's purpose is to affirm the sovereign right of God to let the Gentiles into the people of God if he wants whether unbelieving Jews like it or not. Nevertheless, the very ones who he has hardened currently can still be saved.

11. Romans 16 may actually have been a letter of recommendation for Phoebe to go to Ephesus rather than Rome. I fall off the log on this side.