For whom did this little golden bell ring? 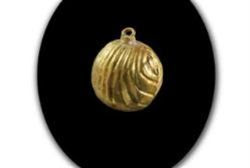 The news is slowly spreading about the discovery of a golden bell found in one of the sewers in an area of Jerusalem known as the City of David. It has been suggested that the bell (pic to the right) might have once been part of the High Priest's garments during the Second Temple period. Here is what Artuz Sheva had to say:

The directors of the excavation on behalf of the Antiquities Authority, archaeologists Eli Shukron and Professor Ronny Reich of Haifa University, said after the finding, “The bell looked as if it was sewn on the garment worn by a man of high authority in Jerusalem at the end of the Second Temple period.

“The bell was exposed in the city’s main drainage channel of that period, between the layers of dirt that had been piled on the floor of the channel,” they continued. “This drainage channel was built and hewn west to the Western Wall of the Temple Mount and drained the rainfall in the different parts of the city, through the City of David and the Shiloah Pool to the Kidron valley.”

The excavation area, above the drain, is located in the main street of Jerusalem which rose from the Shiloah Pool in the City of David. In this street an interchange was built through which people entered the Temple Mount. The remains of this interchange are what is known today as Robinson’s Arch. Archaeologists believe that the eminent man walked the streets of Jerusalem in the area of Robinson’s Arch and lost the golden bell which fell off his outfit into the drain beneath the street.

Jewish sources say that the high priests who served in the Holy Temple in Jerusalem used to hang golden bells on the edges of their coats. The book of Exodus (Shemot), for example, contains a description of the coat of Aaron the high priest in which it is said that coat contains, “bells of gold.”

While it is unknown if the bell belonged to one of the high priests, archaeologists have not ruled out the possibility.

Certainly is exciting stuff. But I am not sure if everything attributed here to the archaeologists has come from them. Ronny Reich, in particular, is a careful excavator and scholar and is more careful about making unfounded claims. But newspapers on the other hand can sometimes overstate the evidence. The AP is also running this story, but says that it is a rare find and notes that it is not known if it belonged to a priest.
Jim Davila has an interesting take on the find which I think is more balanced.

Well, maybe. On the one hand it is true that the only references to golden bells in the Hebrew Bible are to bells on the vestments of the high priest (Exodus 28:33-34; 39:25-26). On the other hand, first, the only other mention of bells (a different Hebrew word) refers to horses' trappings (Zechariah 14:20). Presumably, bells were used in many other contexts, so our sample of cultural allusions is limited. But, you say, what about golden bells? Well, second, Isaiah 3:16-18 refers to bangles that the rich women of Jerusalem wore on their ankles and which "tinkled" or made some king of bangle noise. These ladies clearly had lots of jewelry and finery (cf. also vv. 19-23), so it seems entirely likely that they sometimes wore bells as jewelry and that some of those bells might well have been made of gold. And we know that Second-Temple-era ladies in Jerusalem had very nice gold earrings. So this bell need not have come from "a man of high authority."

So while this is an interesting find, it is not certain that it once belonged to the High Priest. In fact, all we know is that it is a bell from the Second Temple period, full stop. To begin to suggest that it might have belonged to the high priest is to make a claim that simply can't be proven. It will, however, attract more attention to the find, and money to the city of David project.
I hope that this bell will not start showing up in Sunday sermons as "proof of the Bible's accuracy", because it is not. But I suspect that those who do will link this bell to the urban legend about how a rope was tied to the priests leg while he was in the Holy of Holies. If those outside no longer heard the bells ringing they assumed God had killed the priest and they would pull him out. Unfortunately, dear readers, it is not true. You can't find it in the Bible. The earliest reference is in the 13th century Jewish work known as the Zohar (see here for an explanation), so please don't preach it or connect it to the discovery of this little golden bell.
So to whom did the bell belong? We don't know and it is next to impossible for us to know.
Posted by John Byron at 12:00 AM