One person's crap is another person's treasure. 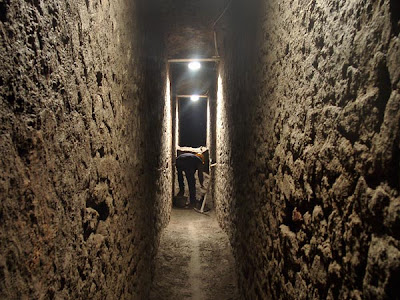 Among his many skills, my father was a plumber. He started in the plumbing business before he expanded into other aspects of the building industry. Once, while I was helping him to clear a waste line in someone's house, he must have noticed my lack of enthusiasm for the job and offered my a bit of plumbers wisdom. "One man's crap is another man's bread and butter." Gross, I know, but he did quite well as a plumber and there are very few of us who can do without them. I suspect there have been some who were willing to pay a plumber any price to fix a household disaster.
As I have studied and become more involved in archaeology over the years I have used a revised version of my father's statement. I tell my students that archaeologists love other people's crap. And it is true. Give an archaeologist a sewer and she/he will be salivating over the potential artifacts they might find. J
Similarly, archaeologists also love to dig in other people's garbage. It is amazing how what someone threw away thousands of years ago is valuable to us now. Makes you wonder what archaeologists will say about us in the future.
In light of all of the above, I want to point out an National Geographic article which describes some recent excavations in the sewers of Herculaneum. This ancient Roman city was destroyed by the same volcanic eruption that destroyed Pompeii. It is an archaeological dream since no subsequent settlements were built on the remains. Researchers simply have to dig through the ash to discover what was left behind in the destruction of 70 CE. In this case, however, they are sifting through the refuse of Herculaneum's sewers. Here is a portion of the article.

Ten tons of the stuff has been excavated from a cesspit beneath the ancient town of Herculaneum, near Naples.

Flushed down sewers from apartment blocks and shops, the deposit—the largest collection of ancient Roman garbage and human waste ever found, researchers say—dates to about A.D. 79. That year a catastrophic volcanic eruption of Mount Vesuvius buried Herculaneum, along with its more famous neighbor, Pompeii.

Lost jewelry, coins, and semiprecious stones from a gem shop have been found, along with discarded household items such as broken lamps and pottery, according to Wallace-Hadrill, director of the Herculaneum Conservation Project, a Packard Humanities Institute initiative.

And, coming from a onetime district of shopkeepers and artisans, the organic material has revealed just what your run-of the-mill Roman might have eaten in this coastal town, according to project scientists, who collaborated with the British School at Rome and the archaeological authorities for Naples and Pompeii.

You can read the whole article here.
So next time you flush something, keep in mind that someone may be studying it in the future.
Posted by John Byron at 12:00 AM