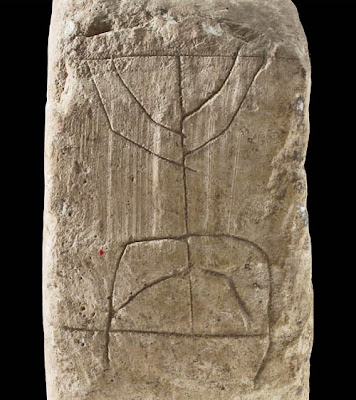 A few weeks ago I posted about how archaeologists were digging in the sewers of Herculaneum, a city destroyed by Mount Vesuvius when Pompeii was destroyed. Yesterday I posted on the Jewish holiday Tisha B'Av (the ninth of Av), which is the day on the Jewish calendar the traditionally marks the destruction of both Solomon’s and Herod’s temple. Today both of those topics come together.

The Israeli Antiquities Authority (IAA) has announced the discovery of two rare artifacts, a Roman sword still in its scabbard and a stone upon which was engraved a menorah. These two finds represent an unusual combination of artifacts that bring us echoes of the Jewish revolt and the Roman destruction of Jerusalem and the temple (66-70 CE).

The sewer where these artifacts were discovered runs from the pool of Siloam, which is also a relatively recent discovery. I walk with my team in that area just last month as we looked around the excavations in Jerusalem.

Here are some highlights of what the IAA has to say about the discovery.

On the eve of Tisha B’Av, artifacts were exposed that breathe new life into the story of the destruction of the Temple in Jerusalem. A sword in a scabbard that belonged to a Roman soldier and an engraving of the Temple’s menorah on a stone object were discovered during work the Israel Antiquities Authority conducted in the 2,000 year old drainage channel between the City of David and the Jerusalem Archaeological Garden. The channel served as a hiding refuge for the residents of Jerusalem from the Romans during the destruction of the Second Temple.

A stone object adorned with a rare engraving of a menorah was found in the soil beneath the street, on the side of the drainage channel. According to Shukron and Professor Reich, “Interestingly, even though we are dealing with a depiction of the seven-branched candelabrum, only five branches appear here. The portrayal of the menorah’s base is extremely important because it clarifies what the base of the original menorah looked like, which was apparently tripod shaped”. The fact that the stone object was found at the closest proximity to the Temple Mount to date is also important. The researchers suppose a passerby who saw the menorah with his own eyes and was amazed by its beauty incised his impressions on a stone and afterwards tossed his scrawling to the side of the road, without imagining that his creation would be found 2,000 years later.

You can read the rest of the article here as well as download some color photos.

BTW, these are the same archaeologists who just last week announced the discovery of a golden bell from the same sewer. At first the media was reporting that it belonged to a high priest, but they seem to have backed away from that claim now.

For a good overview of the history of the sewers and tunnels being excavated as well as the politics of the excavations, check out the Boston.com article In a Jerusalem Tunnel a glimpse of ancient war.
Posted by John Byron at 12:00 AM