When the Romans Destroyed Jerusalem 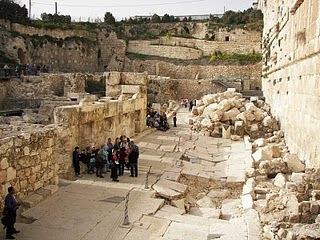 Beginning at sunset last night, Jews around the world began to commemorate the destruction of the temple by the Romans in 70 CE. This holiday is known as Tisha B'Av (the ninth of Av), which is the day on the Jewish calendar the traditionally marks the destruction of both Solomon’s and Herod’s temple. Today’s picture is of rock tumble from the Roman destruction laying as it was found when archaeologists uncovered it in the 1960s and 70s.

When it was destroyed in 70 CE Jerusalem was considered to be one of the most beautiful cities. It was thought to reflect the glory of God and many people came as tourists to Jerusalem and its temple. The Babylonian Talmud states:

“Whoever did not see Herod’s Temple standing never saw a beautiful building his whole life” (Succah 51b).


In the mid to late 60’s CE, Rome was struggling to put down a Jewish rebellion in Palestine. Titus, the future emperor of Rome, destroyed Jerusalem and the temple to discourage Jews from having nationalistic feelings connected to the city. After the city’s destruction, Jews were generally prohibited to enter into the ruins. Once a year, however, they were allowed to enter in order to mourn the destruction of the temple.

In 132 CE, the Emperor Hadrian was strengthening Roman power in Palestine. He also began to rebuild Jerusalem as a Roman city, which the Jews saw as a bad omen and a second Jewish revolt began which lasted until 135 CE.

The spiritual leader of the revolt was Rabbi Akiva from Caesarea who was executed by the Romans. The military leader was a Jew named Simon who had Messianic qualities and aspirations. He received the name Bar Kokhba, “Son of the Stars.” It appears that for a while they had control of Jerusalem, but eventually lost.

After the second revolt was defeated, Jerusalem was rebuilt by the Romans who changed its name in an attempt to erase the name from history. It was re-named Aelia Capitolina. Aelia was the family of Hadrian and Capitolina were the trinity of gods on the Roman hill and now declared to be part of the new city. The old city of Jerusalem today is based much on the pattern of the old Roman city, including the walls, the street lay out and the gates.

In addition to commemorating the destruction of two temples, Jews will also remember the many calamites that have befallen them over their long history. It is solemn fast day and many will refrain from washing, working and even greeting one another.

Coincidentally, archaeologists announced this week the discovery of a Roman soldier's sword and a stone etching of a menorah. Both were found in an sewer that was been the focus of recent excavations. The archaeologist, Ronny Reich, believes the sword may come from the time if the Jewish revolt. See pictures and read the article here.
Posted by John Byron at 12:00 AM