The Credibility of the Miracles in the New Testament 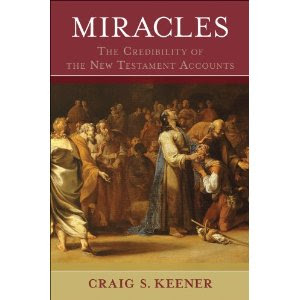 Miracles. The Bible is full of them. But few in the western world have ever see one. I know I have never seen one. I have heard plenty of stories about them, but they always seem to take place somewhere else. A place where I can't got to see it or the person who experienced the miracle.
And the truth is the longer you go without seeing a miracle the more you suspect that they no longer happen today or, quite simply, never happened in the past either. This is a particular problem of the modern age. We can explain so much through science that we are able to explain away many things that might have been called a miracle. The same happens with the miracles in the Bible.
But Craig Keener believes in miracles, especially the ones of the Bible and says that modern believers should expect them. Keener is professor of New Testament at Asbury Seminary and has recently published a two-volume work titled: Miracles: The Credibility of the New Testament Accounts (Baker, 2011).

Most modern prejudice against biblical miracle reports depends on David Hume's argument that uniform human experience precludes the possibility of miracles. Yet current research shows that human experience has been far from uniform.

Hundreds of millions of people all over the world in all cultures, in both ancient times and in modern times, claim to have experienced miracles. In Miracles New Testament scholar Craig Keener argues that it is time to reevaluate Hume's evaluation of the miraculous in light of the growing stock of evidence available to us in support of miraculous events.

This magisterial, wide-ranging and meticulously researched two-volume study presents the most thorough current defense of the credibility of the miracle reports in earliest Christian history, namely the Gospels and Acts, and also for plausibility of the miraculous occurring in today's world. Covering methodological concerns and assumptions, empirical evidence, and majority-world assumptions, Keener also draws on claims from a range of global cultures and takes a multidisciplinary approach to the problem of miracles.

Thus Keener argues, that when the methodological issues are properly dealt with, and the historiographical veracity of many miracle accounts throughout history and from contemporary times are explained, our best option remains to acknowledge them as genuine divine acts which, in turn, lend credence to biblical miracle reports.

Keener recently gave an interview to Christianity Today about his book. Here is some of what he had to say about miracles and New Testament scholarship:

Miracles are an unusual subject for a New Testament scholar. What led you to it?

I was going to write a footnote in my commentary on Acts, and was dealing with questions of historical reliability. Many scholars dismiss miracle stories as not historically plausible, arguing that they arose as legendary accretions.

I was familiar with [contemporary] reports of miracles taking place. There must be thousands of such reports. It was inconceivable to me that people would say eyewitnesses can't claim to have seen such things.

What do you want to accomplish with this book?

Primarily, to challenge scholars who dismiss miracles in the Gospels as legends and not historically plausible. Eyewitnesses say these kinds of things all the time. I also want to challenge the bias that says these things can't be supernatural. I believe God does miracles, and I don't see why we scholars are not allowed to talk about it.

We have been embarrassed by the miracle stories, and have tended to allegorize them more than other narratives. Accounts from the Temple of Asclepius, the Greek god of healing—nobody allegorizes those. I agree that the Gospel writers are teaching us broader principles with broader applications. But in much of the majority world, when people read these narratives of healing, they see a God who cares about their suffering, who meets them at their point of need. I think we in the West can learn from the way they hear.

One of your main points is that non-Western cultures may provide a better paradigm for reading the Gospels than the academic Western paradigm. Can you say more?

Most cultures believe and report experiences that do not easily fit our Enlightenment paradigm. Hume may have been aware of that, because he makes a point of dismissing reports from "ignorant, barbarous" peoples. Hume's ethnocentrism is well-documented. It's not an argument that would fly too well in the 21st century.

Are you suggesting that even in our own era, there is an ethnocentrism in the way scholars read the New Testament?

Yes, though I think there is more openness today. If somebody today said what Bultmann said, that nobody in the modern world believes in miracles, then that would be flat-out having your head in the sand.

You can read the rest of the interview here. In addition to talking about New Testament scholarship Keener talks about his own experiences with researching the miraculous. It is an interesting read and I imagine his book will generate a good discussion.
Posted by John Byron at 12:00 AM