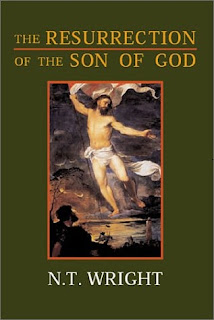 This is the last week of the book giveaway before Christmas. This week I am giving away N.T. Wright's - The Resurrection of the Son of God (Fortress, 2003). Here is the blurb.

Why did Christianity begin, and why did it take the shape it did? To answer this question – which any historian must face – renowned New Testament scholar N.T. Wright focuses on the key points: what precisely happened at Easter? What did the early Christians mean when they said that Jesus of Nazareth had been raised from the dead? What can be said today about his belief?

This book, third is Wright’s series Christian Origins and the Question of God, sketches a map of ancient beliefs about life after death, in both the Greco-Roman and Jewish worlds. It then highlights the fact that the early Christians’ belief about the afterlife belonged firmly on the Jewish spectrum, while introducing several new mutations and sharper definitions. This, together with other features of early Christianity, forces the historian to read the Easter narratives in the gospels, not simply as late rationalizations of early Christian spirituality, but as accounts of two actual events: the empty tomb of Jesus and his "appearances."

How do we explain these phenomena? The early Christians’ answer was that Jesus had indeed been bodily raised from the dead; that was why they hailed him as the messianic "son of God." No modern historian has come up with a more convincing explanation. Facing this question, we are confronted to this day with the most central issues of the Christian worldview and theology.

So if you want to win this book put your name below and I will draw a random winner on Sunday. Once chosen the winner has five days to claim the book. Good luck to you all.
Posted by John Byron at 12:00 AM