Does reading the Bible make you more liberal? 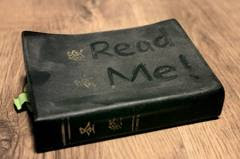 In the realm of politics, the Bible has always had a role. It was quoted by our founding fathers and it was used on both sides of the slavery debate. And bible verses find their way into the political speeches made by members of both parties. what is often apparent, however, is that those quoting the Bible have probably not read it and are simply throwing our a verse like a chant at a sporting event. However, if you are among those who do read the Bible, then you are usually viewed as being more conservative in your politics. Or are you?
A recent survey tends to turn that stereotype on its head. A Baylor Religion Survey found that the more often someone read the Bible the more liberal then tended to be. Christianity Today reports that the more you read the Bible the more you are likely to oppose things like the death penalty, the patriot act, and see the importance of social issues. Here are some of the numbers.

13 percent decrease in support for the Patriot Act

45 percent increase in support for abolishing the death penalty

22 percent decrease in seeing religion and science as incompatible

The survey suggests that Bible readers are not as they are usually stereotyped by the media. So why does this happen? Here is what the article suggest.

Why does this happen? One possible explanation is that readers tend to have expectations of a text prior to reading it. Given the Bible's prominence in our society, it's little wonder that many people think they know what's in it before they open it up. But once they start reading it on their own, they are bound to be surprised by something, and this surprising new content is then integrated and grafted on to the familiar. Beliefs do change with the addition of new information.

But it doesn't have to be unfamiliar content to surprise the reader. It just has to be personally relevant. Frequent Bible readers may have different views of biblical authority, but they tend to read it devotionally, looking for ways in which Scripture is speaking directly to them. They will read until struck by something that sticks out in the text. Even if the reader thinks the Bible has some error or needs a lot of interpretation, this thunderbolt moment can take on tremendous personal significance.

But frequent Bible readers don't just see the Bible as personal. They also see it as authoritative, written by an author who had a specific context and intent, and they want to conform to its message. After all, why read the Bible with no desire to embrace what it teaches?

In short, sometimes reading the Bible can change views and attitudes because readers are surprised by what's in it. Other times, it's just a matter of discipleship.

You can read the rest of the article here.

If this is true, then it makes you wonder if those people who start a sentence with "well, the Bible says" have actually read the Bible.

Your brain on biblical inerrancy. Any Questions?

I am not sure if you have seen this before. I find it a humorous way to explain the threat that inerrancy poses to faith and how it works.
Posted by John Byron at 9:24 AM 6 comments:

In the mail: Paul Through Mediterranean Eyes 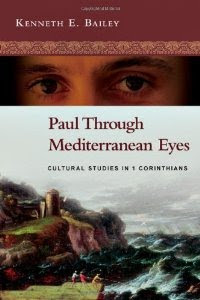 Many thanks to the kind people at IVP Academic for sending me a copy of Kenneth E. Bailey's Paul Through Mediterranean Eyes: Cultural Studies in 1 Corinthians. I plan to read and review the book here on the blog in the near future. Here is the book's description.

Paul was a Hebrew of the Hebrews, steeped in the learning of his people. But he was also a Roman citizen who widely traveled the Mediterranean basin, and was very knowledgeable of the dominant Greek and Roman culture of his day. These two mighty rivers of influence converge in Paul's first letter to the Corinthians.With razor-sharp attention to the text, Kenneth Bailey examines the cultural milieu and rhetorical strategies that shaped this pivotal epistle. He discovers the deep layers of the Hebraic prophetic tradition informing Paul's writing, linking the Apostle with the great prophets of the Old Testament.Throughout, Bailey employs his expert knowledge of Near Eastern and Mediterranean culture to deliver to readers a new understanding of Paul and his world. Familiar passages take on a new hue as they are stripped of standard Western interpretations and rendered back into their ancient setting.

If you are not already familiar with Bailey's work I suggest you also read his other books in which he applies his understanding of Mediterranean culture to the exegesis of the New Testament. Here is a bit of his biography.

Kenneth E. Bailey is an author and lecturer in Middle Eastern New Testament studies. An ordained Presbyterian minister, he also serves as Canon Theologian of the Diocese of Pittsburgh of the Episcopal Church, USA. He holds graduate degrees in Arabic language and literature, and in systematic theology; his Th.D. is in New Testament. He spent forty years living and teaching New Testament in Egypt, Lebanon, Jerusalem and Cyprus, still holding the title of research professor (emeritus) of Middle Eastern New Testament studies at the Ecumenical Institute (Tantur), Jerusalem.

Who wants to be a Bible millionaire? 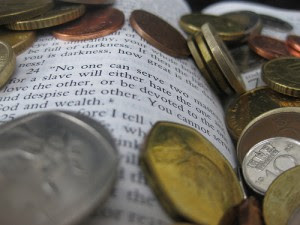 I am sorry folks. I know that between Amish vigilantes and Jesus Ween I have posted some offbeat stuff this week. But I only post what I find.
For this Wednesday I would like to draw your attention to a new App for your iPhone. It is a combination Bible trivia and slot machine. Players answer questions about the Bible. Each correct answer brings the player closer to the $1,000,000 prize. There is no mention of any an actual cash prize if you get all of the questions right. But you will be given an opportunity to buy one of the organizations books, which they describe as "a future best seller." Hmm, I should start describing my books that way.
Below is what the article has to say as well as a video demonstration.

San Jose, California – Morals and Integrity Publishing, a San Jose Area based Charity Organization, announced today the release of its iPhone app, Make Me A Bible Millionaire 1.1, on the iTunes App Store. Make Me A Bible Millionaire allows iPhone, iPad and iPod touch users to learn the Word of God in an innovative fun way while challenging themselves to reach the $1,000,000 dollar prize.

Challenge yourself and friends to see who can reach the top prize first. There are 200 questions in four groups which are constantly rotating, making the game challenging each time you play. Make Me A Bible Millionaire will help you remember and recite Holy Bible scriptures, names and places in the Bible.

There are links given to purchase items such as the future best-selling book God’s Voice Your Choice which is said to cause God to never stop talking to you. There are also opportunities to win real cash prizes. This game is one of a kind and will likely be around for a long time. The game was tested on children ages 7-10 and the constant playing caused the children to remember and recite Bible information that grown adults who have been in the church for twenty years didn’t know. With 16 questions ranging from $200 to $1,000,000 you will enjoy yourself playing Make Me A Bible Millionaire.

You can buy the app at bold4jesus.com. As with the previous posts, I won't comment any further and allow you to reach your own conclusions.
Posted by John Byron at 12:00 AM 2 comments: 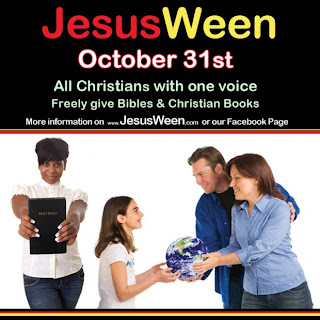 The practice of holding alternative events that compete with Halloween has been going on for quite a while. Local churches sponsor "fall fests" on October 31st at which children came dressed as Bible characters and play games where they win candy.
In theory I don't have a problem with it, I just wish they would admit that what they are doing is celebrating the holiday, but in a separatist way. If they really object to celebrating the night why not ignore it rather than have an "alternative." But the truth, I fear, is that they want to participate and would rather baptize it and call is something else so they can still join in.
Well a new approach is being promoted by a group that has created a "Jesus Ween" event. They plan to give out Bibles and other Christian gifts in a "friendly way." Below is a pair of videos, one from the groups website Jesusween.com and the Huffington Post. I won't make any further comments and leave you to come to your own conclusions.
Posted by John Byron at 12:00 AM 4 comments:

Amish Fundamentalists Punish the Weak with a Haircut 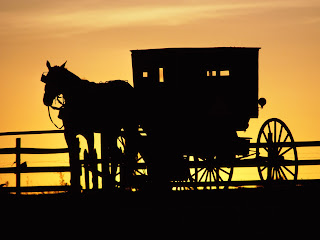 I live in Ashland county Ohio, which has a high population of Amish. It is not uncommon for us to hear the clip-clop of horses as the buggy of an Amish family makes it way down our street to the nearest farmers market or Walmart.
The Amish interact with those of us who are the "English," but they are also a closed community. Few develop close relationships with someone who is not Amish. I do, however, know a few ex-Amish.
So when something about the Amish appears in the news it tends to gets my attention. Recently there has been a string of attacks on Amish men and women by a group known as the Bergholz Clan. This Clan barges into the homes of other Amish that they consider to be weak in faith. They hold down the individual and proceed to cut off their beard and hair. This is intended to be an act that causes shame since Amish men do not shave once they have been married. Below is a video clip of the story that takes place in Holmes County, which is about 50 miles from me. I have tried to embed it. If it doesn't work you can read the story and see the video here.
I suppose there are fundamentalists in every group.
Posted by John Byron at 12:00 AM 2 comments: