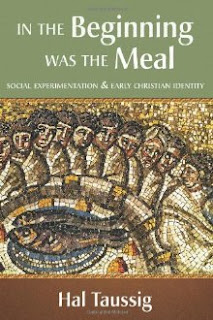 This week's giveaway is Hal Taussig In the Beginning was the Meal: Social Experimentation & Early Christianity (Fortress Press, 2009).


What were the origins of the Eucharist? Taussig, a founding member of the SBL Seminar on Meals in the Greco-Roman World, brings a wealth of scholarship to bear on the question of Christian origins. He shows that in the Augustan age, common meals became the sites of dramatic experimentation and innovation regarding social roles and relationships, challenging expectations regarding gender, class, and status. Rich comparative material and rigorous ritual analysis reveal that it was in just such a swirl of experimentation that the early Christian assemblies, with their "love feasts" and "supper of the Lord," were born. This cutting-edge monograph sheds new light on the social context of early Christian gatherings, illuminating the origins of the Eucharist and of Christianity itself. Taussig draws important implications for the practice of Christian community today.

Put your name below and I will draw a winner on Sunday. Remember, the winner has five days to claim the prize once chosen.
Posted by John Byron at 12:00 AM