More on Embarrassing Moments in the Gospels: Book Notice 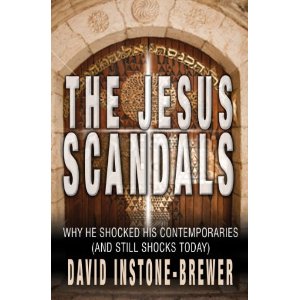 A couple of weeks back I posted on the criterion of embarrassment. This is one of the categories Historical Jesus scholars used to help determine the authenticity of a statement or event in the gospels. The post also included a link to Mark Goodacre's NT Pod where he had recently uploaded a ten minute discussion of the criterion of embarrassment and provided a helpful critique of it.

Today I ran across an interview with David Instone-Brewer on Resurrection Hope in which Frederik Mulder discusses Instonebrewer's new book The Jesus Scandals:Why He shocked his Contemporaries and Still Does Today (Monarch Books, 2012). Here is why he says he wrote the book.


Mulder: David, why did you write this book?

Instone-Brewer: I wrote this book because I want everyone to see there is historical information in the Gospels which no historian would throw out. When you look at the Gospels and see embarrassing things about Jesus – they’ve got to be true because they wouldn’t have put them in if they weren’t.

Instone-Brewer: Yes, and details about the disciples and how dubious they were; how Jesus was illegitimate; accused of alcohol abuse; how Jesus talked about child abuse ... all sort of things they would’ve liked to omit if they wanted to sell the Gospel better. But because it was real, they had to include them. That’s what scholars call the criterion of embarrassment, and I’m putting it across in newspaper style saying “Hey, here’s all the scandals!”. Every article is about one coffee cup length to read, and then it gives you something to talk about in the pub.

The book has six chapters titled the (1) Ineligible Bachelor, (2) Supplanting Passover, (3) Prostitutes, (4) Martial Abuse, (5) Unforgivable Blasphemy, (6) Eternal Torment. Each of these are areas that Instone-Brewer identifies as potentially embarrassing and problematic for the gospel authors. You can read excerpts of each chapter at bethinkinging.org.
Posted by John Byron at 8:55 AM