Were Adam and Eve Cavemen? 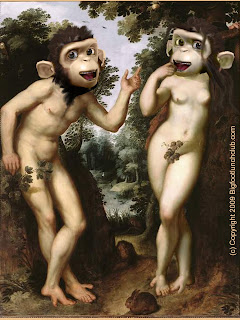 That is what is being suggested by two apologists who are trying to reconcile the human fossil record with the creation stories in Genesis. Interestingly, they seem to focus on Genesis 4 rather then Genesis 1-4. Here is a bit of what the article has to say on the Christian Post.


"Variation among post-Babel humans has led to a great debate among evolutionists, who wonder where they fit on the roadway to being 'truly human.' But that way of thinking misses the fundamental truth. When God created humans, He didn't define our humanness in terms of physical characteristics. We aren't human because we have two arms or legs or skulls of a certain shape or size. Our Creator, who is spirit, made us in His spiritual image," the authors write in the article.

"Genesis reveals aspects of what this implies," they continue. "Our early ancestors made musical instruments and tools, farmed, built cities, and otherwise represented God as stewards of His creation (Genesis 4). With that as our standard, we can cut through the confusion and bias. All those we call 'cavemen' (probably a misnomer) show the same characteristics as the first humans in the Bible."

These first humans were "all descended from Adam through Noah's family," the authors conclude.


Reading this article leads me to the suggestion to me that these apologists are neither scientists nor biblical scholars. The suggestion that humans are created in God's "spiritual image" misses the point about what it means to be made in the image of God. And I am not sure that simply finding connections between city building and the playing of music really provides the "missing link." I think they are playing the wrong tune here.

For a better examination of how to understand the creation stories in Genesis see my review of Peter Enns' book The Evolution of Adam.
Posted by John Byron at 8:45 AM