The last two days we have been in the area that the Romans called the province of Galatia. We drove from Antalia to Konya, which is ancient Iconium. There is not much to tell here other than that Paul passed through Iconium on his first missionary journey (Acts 13:51-14:6; 16:2). It was also to a group of churches somewhere in this area that Paul wrote his letter to the Galatians. If you are familiar with the story of Paul and Thecla, Iconium is also the setting for that story.

The one thing that did impress me was the terrain. The Mountains that we crossed were 8,000 feet at some points and very rugged. I wondered about Paul, Barnabas and others crossing this area as they sought places to preach the gospel. They must have been quite fit and I suspect they hitched rides when they could. Here is a picture of some of the terrain taken from our van. 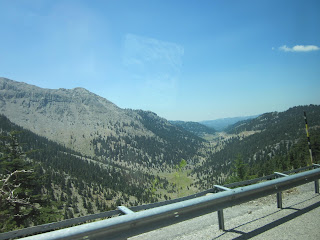 Today we went into the area of Cappadocia. This area is in central Anatloia and has some unusual topography. Here are some pictures of the area. The strange looking hills are made from volcanic ash that has slowly been eroded over time. 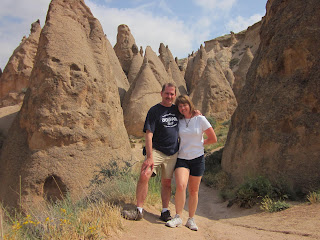 The soft material in the area also meant that people could carve into the hills and build homes, churches and even a monastery as Saint Basil did here in the 5th century. Here are some pictures of the churches within the monastery.

Tomorrow we head for Ankara, the capital of Turkey. I will post what I can.
Posted by John Byron at 12:05 PM