Killing Women and Children: Those stories in the Old Testament we wish would go away 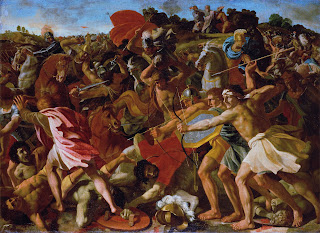 The story of Israel capturing Jericho is well-known, even among children. Sunday school teaches them the amazing story of how Joshua and the Israelites walked around the city for seven days, blowing trumpets, waiting for the walls to fall. And on the seventh day they do fall and according to Joshua 6:20-21 this what happened next.

20 When the trumpets sounded, the army shouted, and at the sound of the trumpet, when the men gave a loud shout, the wall collapsed; so everyone charged straight in, and they took the city. 21 They devoted the city to the Lord and destroyed with the sword every living thing in it—men and women, young and old, cattle, sheep and donkeys.

This part is not often included in the standard Sunday school curriculum. What parent wants to send their children to a religious education class that promotes wholesale genocide and slaughter? Yet this is how the story ends. Indeed, this is how many of the stories end in Joshua, Judges, Samuel, well you get the point. There are some pretty violent stories in the Old Testament. This in and of it self would not be a problem except that the Old Testament claims that God told the Israelites to kill everyone. Readers of the Bible often have a hard time squaring this claim with what the Bible has to say about God elsewhere, and it is an interpretive problem that scholars have been working on for some time.

And it seems that this topic has surfaced in the news and blogs.

On his web site John Piper answered a question from someone who was troubled by such stories. They ask:
Why was it right for God to slaughter women and children in the Old Testament? How can that ever be right? Here is what Piper said:

It's right for God to slaughter women and children anytime he pleases. God gives life and he takes life. Everybody who dies, dies because God wills that they die.

God is taking life every day. He will take 50,000 lives today. Life is in God's hand. God decides when your last heartbeat will be, and whether it ends through cancer or a bullet wound. God governs.

So God is God! He rules and governs everything. And everything he does is just and right and good. God owes us nothing.

Well this got the attention of Old Testament scholar Peter Enns who disagrees with Piper.

Certainly everyone is entitled to his or her own opinion (and what would the internet be without it), and people are always free to accept or reject what others say. Actually, on one level, it is helpful that Piper is willing to offer his views so clearly in a public forum. Characterizing God this way is, in my estimation, its own refutation, and in the end will serve the truth more than obscure it.
But still, Piper’s position raises some serious issues that won’t stay buried for long, and are worth drawing out–at the very least so people can to work through the issue themselves and not be swayed by a public figure taking such a strong stand, or conclude that Piper represents the only option before us.

Pete goes on to list seven reasons why Pipers interpretation is unhelpful. Read it here.


Update (1) : Enns has added another post in reply to some of the comments he received.


Update (2): It was going to happen sooner or later. Someone was going to throw our the "I" word. Denny Burk faults Enns for questioning the Bible "at every turn."


The other person to take a stab at the topic recently is Edith Humphrey. Although a New Testament scholar, she affirmed the importance of not overlooking those troubling stories and instead to dig-in and see how they fit into the overall story and message of the Bible.

Humphrey noted Jesus used the Old Testament to teach his disciples on the Road to Emmaus, and that the apostles used it alongside their own witness to proclaim the Gospel before the New Testament was collected.

“We cannot, then afford to ignore the Bible of Jesus and the Apostolic Church,” she said.
The story of Abraham and Isaac involves human sacrifice and monstrous testing, she said.  She urged readers to “take a deep breath,”  “dive in” and “abandon yourself to the drama of the story, to its power.”

The story about God’s command to Abraham to offer his beloved son Isaac as a burnt offering is not exhorting us to “slavishly obey our religion,” she said.  Instead the story takes us on “a journey on which we, with Abraham and Isaac, learn who God is, and who we are:  it is about mystery, devotion, provision and promise.”

“It is about seeing the life-giving hand of God amidst testing and confusion,” she said.  “It is about faith brought to birth and faith rewarded.”

When it comes to God’s command putting populations under the ban, Humphrey said the difficult questions these stories raise can be seen from a wider historical perspective.

I suspect we will be hearing more about this in the near future.