Seal helps give substance to the story of Samson? 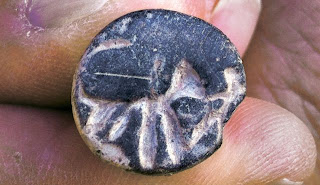 A seal has been discovered at excavations in Beit-Shemesh, which is not far from Tel-Gezer where I have been taking students to dig the last few years. According to Judges 14 and 15, Samson was from Zorah and his wife from Timnah. Beit-Shemesh was located in the same area between the two cities.

Archaeologists have uncovered a seal depicting a man with a large animal. Some say it shows Samson fighting the lion (Judges 14:5-6). Here is what they are saying.


The seal, measuring 1.5 centimeters, depicts a large animal next to a human figure. The seal was found in a level of excavation that dates to the 11th century B.C.E. That was prior to the establishment of the Judean kingdom and is considered to be the period of the biblical judges - including Samson. Scholars say the scene shown on the artifact recalls the story in Judges of Samson fighting a lion.

But excavation directors Prof. Shlomo Bunimovitz and Dr. Zvi Lederman of Tel Aviv University say they do not suggest that the human figure on the seal is the biblical Samson. Rather, the geographical proximity to the area where Samson lived, and the time period of the seal, show that a story was being told at the time of a hero who fought a lion, and that the story eventually found its way into the biblical text and onto the seal.

At this point I will withhold judgment since I am not there, nor am I am expert in this area. But I will note that the seal could also be of a horse and his boy, or a man and another animal. In other words, I am not sure this can be connected to Samson. I am glad the archaeologist are also being cautious. Read the whole story here.

For a piece on a mosaic recently discovered that does depict Samson, go here.
Posted by John Byron at 12:00 AM